Convention centers will be coverted into 24 basketball courts, five of them equipped with cameras to permit television coverage 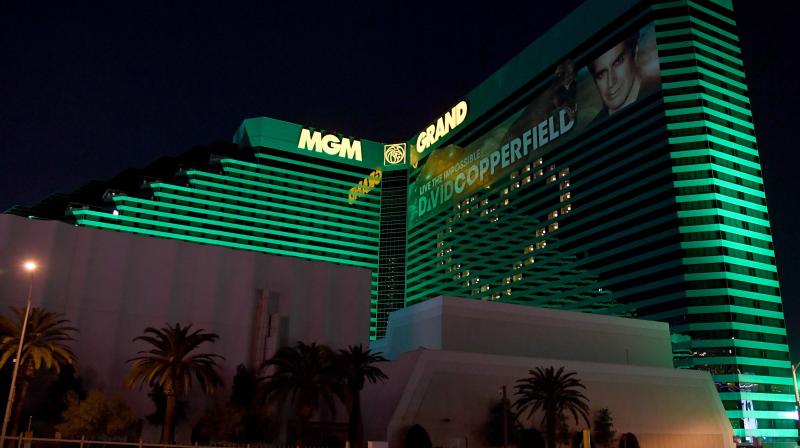 A view of the guest rooms at the shuttered MGM Grand Hotel & Casino on the Las Vegas Strip illuminated to form the shape of a heart as a result of the statewide shutdown due to the continuing spread of the coronavirus. AFP Photo

Las Vegas: MGM Resorts International has pitched a proposal to the NBA to complete the coronavirus-halted 2019-20 season on courts in Las Vegas convention centers, the New York Times reported.

The plan, according to the newspaper, would have players and their families, plus other essential personnel, stay in a quarantined area in MGM hotels along the Las Vegas Strip while practicing and competing on courts in the same facilities.

Players and broadcasters would have access to the usual resort facilities while in the protected area under the plan by MGM, which has 13 Vegas resort properties.

The plan would convert MGM convention centers into 24 basketball courts, five of them equipped with cameras to permit television coverage, and players would reside in connected or nearby hotels.

ESPN has reported the NBA is looking at a similar quarantined area in Orlando involving hotels and courts in private Disney World areas.

The NBA halted its season in March after Utah's Rudy Gobert tested positive for the deadly virus and the league has announced no plan for resuming games or even a timetable for returning to competition.

The league will allow players to conduct individual workouts at team facilities starting Friday in areas where stay-at-home laws allow, the first small step toward resumption.

No plan among those floated in US media has included spectators at games, most focusing on a one-site bubble where players might live and play and only once coronavirus tests are available in sufficient numbers to the public and the NBA has enough tests for everyone involved.

The Mandalay Bay resort, with 4,700 rooms available over three connected hotels, would be the central hub of the MGM Vegas plan. An enclosed walkway would connect the Luxor, where caterers and housekeepers would reside.

The Las Vegas Aces of the Women's NBA play at Mandalay Bay.

In such a plan, players are expected to need a training camp of more than three weeks to prepare for games, which could include the final month of the regular season and two months of playoff contests.