Chennai rushed to a 3-0 lead. The world no. 8 Russian pair shrugged off their initial sluggishness to go 8-6 up in the match. 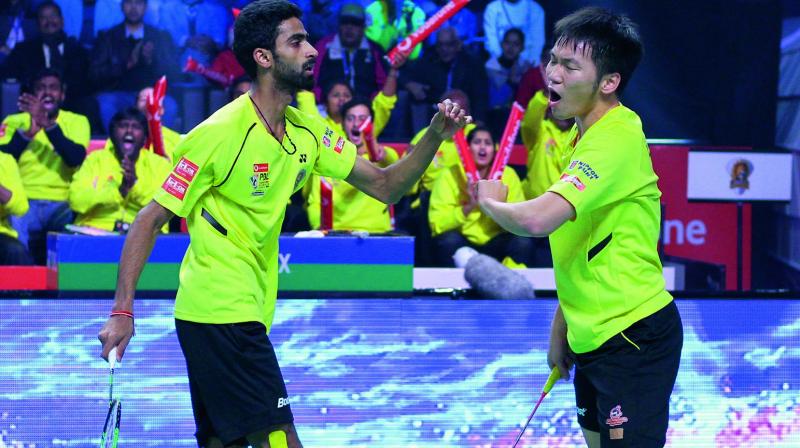 Chennai Smashers’ B. Sumeeth Reddy and Lee Yang in action against Ivanov and Sozonov of Delhi Dashers in their PBL trump match in Lucknow on Wednesday.

After the breather, Tian could not maintain momentum and Tanongsak fought his way back, showing great tenacity to take the lead. But his errors helped Tian save three game points to win the opening game.

In the second game, Tanongsak lead 8-5 and should have tied the match. But he lost focus and committed several errors, allowing the Chinese to win the second game 15-10.

In the second match, Hong Kong’s Vincent Wong Wing Ki registered a 15-10, 15-13 victory over France’s Brice Leverdez to reduce Delhi’s deficit in the tie. World no. 15 Vincent soared to an 8-2 lead and never looked back.

Chennai rode on the Indo-Taiwanese men’s doubles combination of B. Sumeeth Reddy and Lee Yang to post a 15-13, 15-11 victory over Russian trump duo of Ivan Sozonov-Vladimir Ivanov to help Smashers draw first blood in the tie.

Chennai rushed to a 3-0 lead. The world no. 8 Russian pair shrugged off their initial sluggishness to go 8-6 up in the match. After the break, the Delhi pair could not sustain entum and an error-prone play saw them go down in 0-1 in the match.

In the second game, Sumeeth-Yang combined well with the Taiwanese playing exceptionally from the back court.

His deceptive drops and powerful smashes caught Ivan-Vladimir off-guard and they could never recover from the 4-8 deficit.