For the Indians though, the mood-killer has been the needle controversy even though it has not been named by the Games Federation. 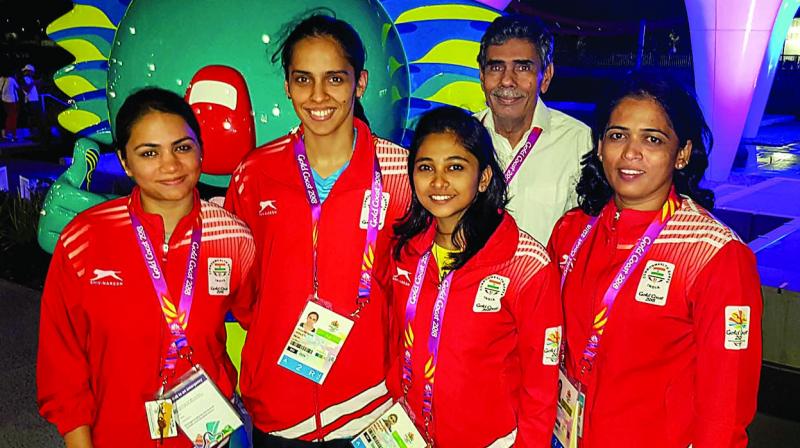 Saina Nehwal along with her father and shooters Apoorvi Chandela, Mehuli Ghosh and Tejasvini Sawant at the Athletes Village.

Gold Coast: Shaken by a needle controversy but in high spirits nonetheless, the jumbo Indian contingent will aim to come good with strong medal-winning performances when the surprisingly low-key Commonwealth Games start with the opening ceremony on Wednesday here.

With just a day to go before the Games officially start, Gold Coast hardly looks like a city gearing up for a sporting festival.

There are signboards all over welcoming the 71 participating countries for the 21st CWG but what’s missing is the festive spirit that usually comes with such an extravaganza.

For the Indians though, the mood-killer has been the needle controversy even though it has not been named by the Games Federation.

The stain of doping has been avoided as tests conducted after the discovery of syringes turned out negative but the violation of the ‘no needle policy’ is enough embarrassment.

However, if the mood at the flag hoisting ceremony was anything to go by, the contingent is unlikely to let that come in the way of a strong showing at the Games, where they have a decent record to boast of.

“What has happened is just stupidity at worst and there was nothing sinister about it. Let’s hope it doesn’t get magnified beyond the stupidity that it was,” said a senior official of the Indian contingent.

At the previous edition in Glasgow, India’s medal tally stood at 64 — 15 gold, 30 silver and 19 bronze — and the 218-strong contingent here will be expected to either better it or ensure that the final count nears the previous haul.

The major burden of expectations will again be on the shooters, boxers, shuttlers and wrestlers — all of whom have been in good form going into the Games. The two hockey teams are also be expected to finish on the podium.

The dark horses include gymnasts and table tennis players, who might just throw up a few surprises.