From Gold Coast to Breda, India have come a long way

“Play to win” and “do the basics right” were Harendra’s mantra who wanted his boys to play one-touch hockey and aim only for a win. 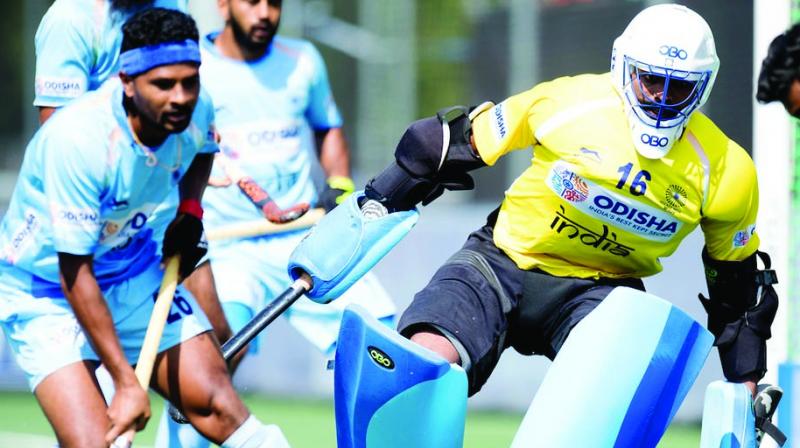 “Pass, run, pass, run, pass, run. Keep rotating the ball,” Indian hockey coach Harendra Singh shouted out the instructions in the huddle as the teams took a breather in their Champions Trophy opening match against Pakistan on June 23.

“Play to win” and “do the basics right” were Harendra’s mantra who wanted his boys to play one-touch hockey and aim only for a win.

India showed plenty of those traits in their silver-medal winning feat at the final edition of the Champions Trophy at Breda, the Netherlands, last week. They thrashed Pakistan in the opener, beat Olympic champions Argentina, played out tough draws against world no. 2 Belgium and world no. 4 Holland before finally going down to top-ranked Australia in the final.

In fact, India know that the gold was there for the taking having dominated Australia in the final before the shootout produced a winner. The numbers present a clear picture. India matched the world champions shot to shot (19 per side), earned four penalty corners to Australia’s one and even dominated in ball possession.

But Australia defeated them where it mattered the most — holding their own when pressure got intense and converting chances, a lesson India will need to learn if they want to win trophies.

Given India’s world ranking (no. 6) and recent form where they struggled at the Commonwealth Games at Gold Coast, they would take plenty of positives from the CT but would also rue the missed opportunity.

Tears trickled down midfielder Manpreet Singh’s eyes, while Sardar Singh stood in silence at the medal ceremony. The man who had led India to the final almost single-handedly, skipper Sreejesh P.R., was a picture of disbelief and offered a faint smile when presented with the best goalkeeper of the tournament trophy. But even though India might not have ticked all the boxes, they showed they have come a long way since the CWG debacle.

Solid defence
“Save your house first and then attack,” is a thought well advocated by most coaches and India followed it to the T at Breda. Defence, which has been their weakest point in the last few years, stood tall with the players not shy of taking body blows, saving penalty corners and playing to a structure even when pressed by Belgium and Holland.

Against Australia, who off set the opponents with their fast pace, India though still had a lot to cover in the group stage.

Sreejesh, the Wall
There have been calls to make him India’s “defence minister” for his stupendous saves and the ability of bring the team back into the game from near hopeless situations, and the 30-year-old showed why he is so integral to the team’s plan. The captain made this tournament truly his own with marvellous saves. Against Olympic champions Argentina, he saved 11 of the 12 penalty corners to keep India in contention for the final and against the Dutch, he weathered a later storm to guide them to the final.

Mental battles
There was a time when India used to lose the game even before taking the field — in their minds. The fear of playing the fast-paced Australians, the tactically strong Germany, the shrew-minded Dutch and the sturdy Argentina played on their minds and many a time a battle was lost even before it had began, but not this lot. Harendra made sure his boys were battle ready with regular psychological sessions and drilling in them the winning mentality. Be it the likes of youngsters Dilpreet Singh, Vivek Sagar Prasad, Simranjit Singh or Surender Kumar and Harmanpreet Singh in the defence, the boys were up for the battle. The return of Sardar Singh too seemed to have its impact with the senior pro evoking fear in the opponents’ ranks.

“I do not go to participate, I go there to win,” has always been Harendra’s mantra, something his players showcased in plenty.

Tactical changes
Hosts Holland ran India close with a berth at final on stake, but this bunch absorbed pressure. Playing at 1-1 with four minutes to go, India withstood waves of attack with defenders Birendra Lakra, Surender and Harmanpreet clearing out every obstacle.

They took this form to the final, battling the Australians at every step. The usually aggressive Australians were pushed into their half as India weaved a series of attacks, giving them no width.

But in the end, Australia handed them a tough lesson — on how to win even when the odds are against you. The Kookaburras earned just one penalty corner and converted it. In the penalty shootout, the first three failed attempts from India meant there was tremendous pressure on Sreejesh, who managed to save the fourth one but it was all too late by then.

Overall, India showed a solid structure throughout the tournament but if there is one thing this team still has to learn, it is winning the big games. With the Asian Games and the World Cup in sight, they will need to build on from here.