While all eyes were on the favoured Indian contingent, Saksansin crept quietly up as he fired a solid seven-under-64. 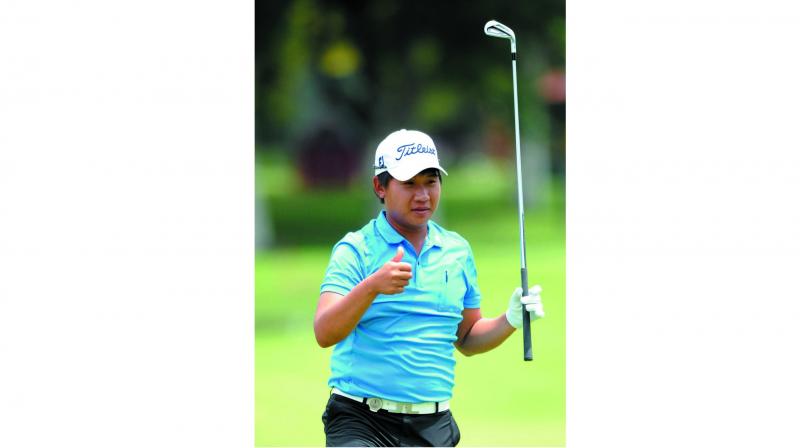 Thailand’s Poom Saksansin gestures after taking the lead on Day One.

Bengaluru: The inaugural Take Solutions Masters got off to a stormy start as Thailand’s Poom Saksansin upset the applecart to waltz to the top of the leaderboard in the opening round here on Thursday.

While all eyes were on the favoured Indian contingent, Saksansin crept quietly up as he fired a solid seven-under-64. The baby-faced Saksansin turned out to be a surprise package and a lethal one too as he ended the day with a comfortable two-stroke lead while racking up his best round on the Asian Tour, at the Karnataka Golf Association.

The rest of the pack was left to play catch-up as Kolkata golfers Divyanshu Bajaj and Viraj Madappa were two strokes behind at tied second after carding similar rounds of five-under-66. Saksansin, who won his first Asian Tour title at the Indonesian Masters last year, turned in a blemish-free card. 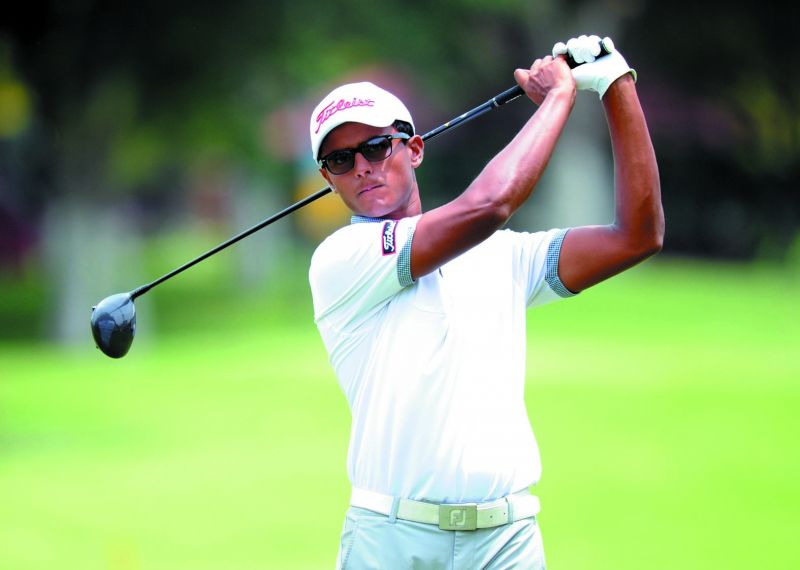 Viraj Madappa in action at the Take Solutions Masters in Bengaluru on Thursday. (Photo: R. Samuel)

With the winds playing havoc during the first round, Sanksansin used it to his advantage as the 24-year-old turned in a card studded with seven birdies. The Bangkok golfer meant business from the onset as he struck three back-to-back birdies on the front nine and saved another stroke on the fifth. While he finished the front nine with a birdie, his back nine was comparatively sedate with just two birdies on the 10th and 11th holes.

Having kicked off the contest on the right foot, the pro is pumped up to give his all in the coming days. “I have to give my best from Friday. The course was in good condition but the greens were a little deceptive. Though my putting wasn’t that great, my driver and iron was good,” said Saksansin.

Meanwhile, Madappa hoped for a better outing. “This is like my second home course. I think I could have hit a lot closer and given myself better opportunities. I hit okay but it was nothing extraordinary,” said the 19-year-old. Local favourite S. Chikkarangappa turned in a card of three-under-68, to end the day tied 7th along with Scott Barr, Sinnott Todd, Om Prakash Chauhan and local boy Khalin Joshi.

S.S.P. Chawrasia also endured a slow day carding two-under-69, to end at tied 12th along with 13 other golfers, while compatriot Shiv Kapur, troubled by pain throughout the day ended tied-26th with a one-under-70. Adding to the woes of the Indian contingent, Jeev Milkha Singh, looking to get back into the game, carded eight-over-79 to finish a miserable tied 142.