Does meditation to avoid distractions and rues missing out on his son’s birthday. 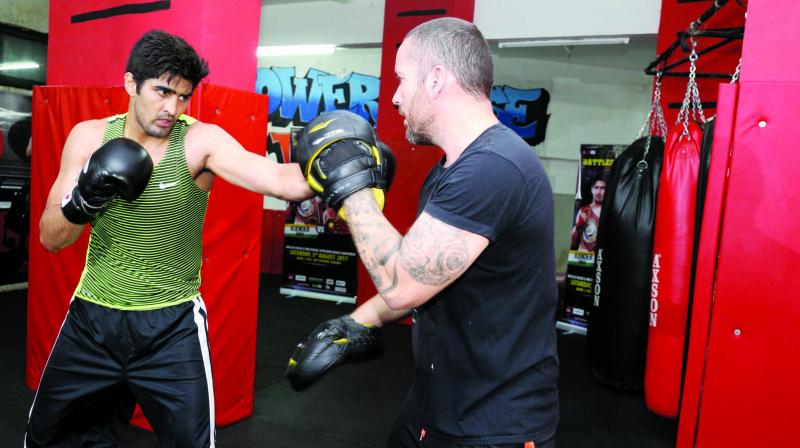 Given the ongoing hostility between India and China, the fight between Vijender and his Chinese opponent Zulpikar has gained political colour.

As the much-anticipated fight night is one night away, star of the show Vijender Singh is keeping himself calm for Saturday’s Pro Boxing fight against Zulpikar Maimaitiali. Both will compete for a double title  — WBO Asia Pacific Super Middleweight and WBO Oriental Super Middleweight. Their fight in ‘Battleground Asia’ will be last and much awaited of the night, which will see a total of seven bouts at NSCI Dome in Worli.

Given the ongoing hostility between India and China, the fight between Vijender and his Chinese opponent Zulpikar has gained political colour. Vijender is aware of the prevailing situation between the two neighbours and wants to teach the Chinese a lesson.

“I feel the responsibility and I am totally confident,” said Vijender who has been unbeaten in his eight professional bouts and knocked out seven of his opponents with his trademark knock out punch.

The 31-year-old is aware that Mumbai crowd will be vocal in support for him and would want him to knock out his 23-year-old Chinese rival as soon as possible. “I have a game plan which I discussed with my coach. He has asked me to stay calm,” he said.

Vijender is also using meditation to focus on the fight and do away with the outside distractions. “I have been doing meditation, which I learned from Baba Ramdev to focus on what is my job as a boxer. The main focus in on controlling weight, your body should fully recover after perspiring here,” he said.

Vijender’s last fight was in December against Francis Cheka and he isn’t worried about more than seven months layoff. He came to India on Sunday after a lengthy training session with his Manchester based trainer Lee Beard. “I have been training, I go to the gym daily, I went to Manchester for training. We planned it (the bout) in April, but it is happening now. My coach says right fight should be taken at right time and I believe it is the right time now,” he said.

The busy schedule meant Vijender wasn’t able to be with his son who celebrated his fourth birthday on Thursday. “I missed his birthday. My family can’t be here as my wife is not into boxing. She is more into puja path. She is superstitious during my bouts),” said Vijender about his wife Archana Singh and son Arbir Singh. The duo has never seen his live boxing event as Archana doesn’t want to see punches hurled on her husband’s face.

Beard feels Vijender is physically ready for the fight. “His body is in great shape ahead of the weighing in on Friday. I am trying to keep his mind calm and relaxed. I want to make sure he doesn’t do anything crazy. He is physically perfect for the fight and we are doing just mental training now. He knows the game plan what he has to do in the ring on Saturday night,” Beard said.