Sindhu and Saina will once again be India's best bet as they look to put up a good show this week. 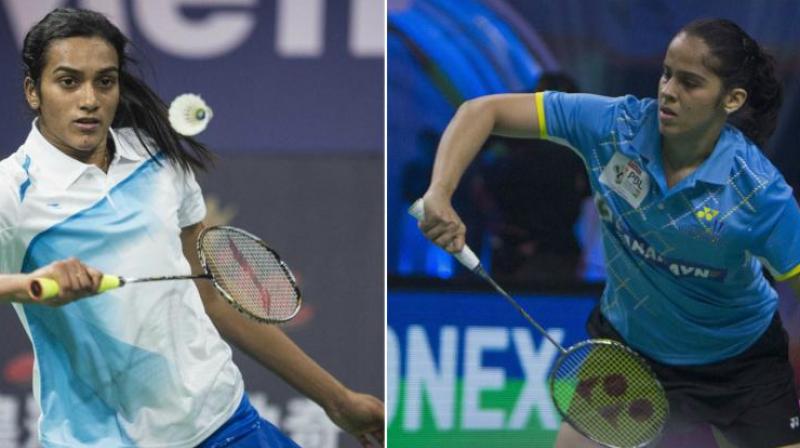 Both PV Sindhu and Saina Nehwal had made early exits in three successive tournaments at China, Korea and Denmark before somewhat regaining form with a quarterfinal finish at the French Open and the duo will be desperate to go deep in the draw. (Photo: AFP/PTI)

Fuzhou: Kidambi Srikanth has decided to give China Open a miss but top Indian shuttlers P V Sindhu and Saina Nehwal will have their task cut out when they begin their campaign at the USD 700,000 event, beginning here on Tuesday.

Former world number one Srikanth was pitted against reigning two-time world championship and numero uno ranked Kento Momota of Japan in his opening round but he pulled out of the tournament.

Sindhu and Saina will once again be India's best bet as they look to put up a good show this week.

All eyes will also be on men's doubles pair of Satwiksairaj Rankireddy and Chirag Shetty, who had reached the finals at the French Open last month.

Both Sindhu and Saina had made early exits in three successive tournaments at China, Korea and Denmark before somewhat regaining form with a quarterfinal finish at the French Open and the duo will be desperate to go deep in the draw.

Sixth seed Sindhu, who claimed the World Championship gold in August, will begin her campaign against Germany's Yvonne Li, while eighth seed Saina will open against China's Cai Yan Yan.

Sindhu is likely to face either three-time World Champion Carolina Marin or World number one Tai Tzu Ying in the quarterfinals if she clears the initial rounds.

Saina, on the other hand, might come across Japan's second seed Akane Yamaguchi in the last-eight but has to trump her opponents in the first two rounds.

The BWF World Tour Super 750 tournament will also feature a host of Indian male shuttlers as they vie for honours this week.

B Sai Praneeth, who had won a bronze at the World championships, will face Tommy Sugiarto of Indonesia.

Sameer Verma will square off against Hong Kong's Lee Cheuk Yiu, while HS Prannoy, who recently recovered from a bout of dengue, is up against Rasmus Gemke of Denmark.

Former Commonwealth Games champion Parupalli Kashyap, who had reached the semifinals at India Open and Korea Open, will face Thailand's Sitthikom Thammasin in the opening round.

In doubles, Satwik and Chirag will look to continue their good run as they open against Korean combination of Kim Gi Jung and Lee Yong Dae.

Manu Attri and B Sumeeth Reddy will face Malaysian pairing of Aaron Chia and Soh Wooi Yik in the first round.

Women's doubles pair of Ashwini Ponnappa and N Sikki Reddy will meet China's Li Wen Mei and Zheng Yu, while Satwik and Ashwini will take on Canadian pair of Joshua Hurlburt-Yu and Josephine Wu in the mixed doubles.

Another mixed doubles pair of Pranaav Jerry Chopra and Sikki will face off against Chinese Taipei's Wang Chi-Lin and Cheng Chi Ya.