After the conclusion of Round 4, Astra Honda’s Rheza Danica Ahrens leads the overall drivers’ championship standings with 148 points. 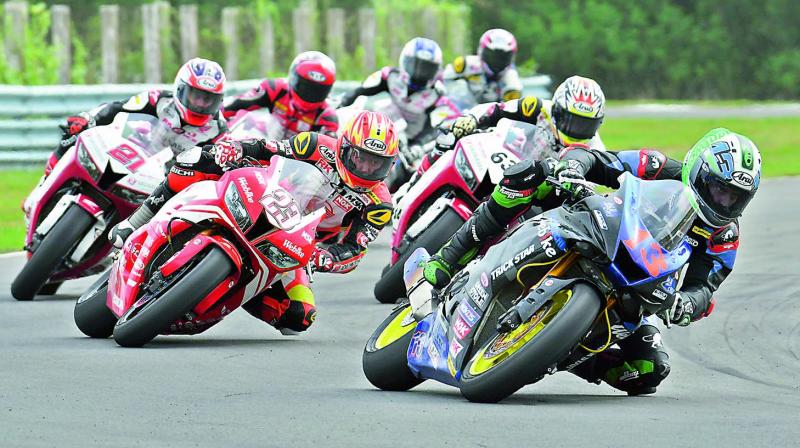 Action from round four of the FIM Asia Road Racing Championship at the MMRT in Chennai on Sunday.

Chennai: Honda’s Indian team — Idemitsu Honda —rounded off the FIM Asia Road Racing Championship’s fourth round by claiming a double podium finish on the home soil at the Madras Motor Race Track here on Sunday, after the 20-year-old Taiga Hada, finished third in the 600 class.

However, Indian racers Rajiv Sethu and Anish Shetty of team Idemitsu Honda finished at the bottom half of the standings in Race 2 of the Asia Production 250cc category.

Sethu, who was 13th in Race 1 on Saturday, finished 16th, while Shetty was 19th on Sunday after failing to finish the race a day earlier, in the 24-man race.

After the conclusion of ARCC’s Round 4, Astra Honda’s Indonesian driver Rheza Danica Ahrens, who finished 17th on Sunday, leads the overall drivers’ championship standings with 148 points, ahead of his team mate Maryo Suryo Aji by 26 points and Sarmoon by 40 points.

Sethu is 24th in the31-biker list with 3 points, ahead of his team mate Shetty by a point.

Rheza and Maryo’s consistent performances have put their team on top of the team championship standings with 164 points. Team Yamaha Thailand (113) and Yamaha Yamalube KYT (98) are on their trail.