Sports   In Other sports  06 Dec 2017  National Sports Code ensuring transparency to be introduced soon: Rajyavardhan Rathore
Sports, In Other sports

The sports minister reiterated that the Sports Authority of India (SAI) will undergo a structural reform in the coming years. 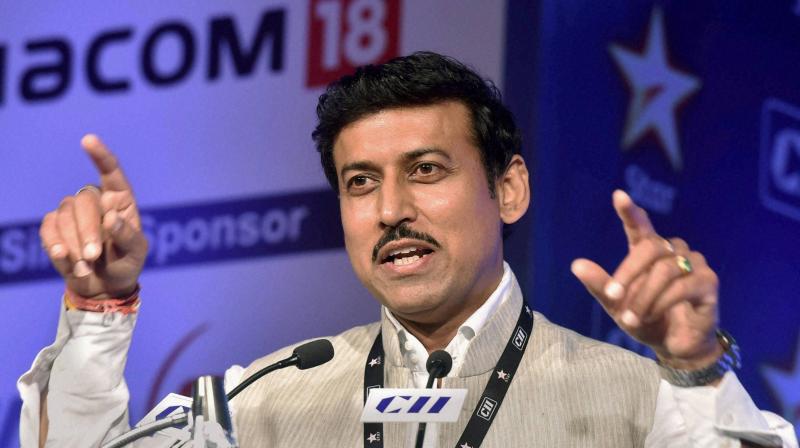 The Olympian also talked about the 'Khelo India' initiative to promote the culture of sports in the country. (Photo: PTI)

Bhopal: Sports Minister Rajyavardhan Singh Rathore has said a National Sports Code will be brought to ensure transparency in the sports organisations.

Speaking at the sidelines of a sports award function here, Rathore said, "We are building a national sports code. Under the code we will have the provision of transparency to run the federations and sports organisations efficiently."

He added, "It depends on person's capabilities, who are heading the affairs, that how they want to run the organisation. So the most imperative thing is the group of people in a field. Seeing the political scenario around, I am sure that good people will come into the field and change the environment."

The sports minister reiterated that the Sports Authority of India (SAI) will undergo a structural reform in the coming years in wake of enhancing the efficiency of the body.

"We want to change the structure of Sports Authority of India. And for that we want to bring the coaches to the senior positions. We want them to be a part of the decision making body. By the year 2022-23, the strength of SAI will be reduced to almost 50 per cent. We want to make the body lean to improve the efficiency," he quipped.

The Olympian also talked about the 'Khelo India' initiative to promote the culture of sports in the country.

"We will invest Rs. 40,000 crore for 'Khelo India' which will begin from January, exclusive of the live telecast investment," he said.

He informed that that under the initiative thousand players will be chosen each year and will be provided scholarship of Rs 5 lakh for a continuous period of eight years.

Rathore emphasised on the importance of building and promoting coaches to develop sports and notified about his planning to do so.

"Till now the officials at sports federation and ministry used to be VIPs, now this culture will not be followed. Now the most important people will be players, coaches and spectators. We will now provide incentives to the coaches at grassroots level and will digitalise the system to do so," he opined.

Rathore concluded that a bank of coaches will be built under Khelo India initiative and will also have certification courses for coaches.