Indian boxers shine bright at the National Sports Club of India (NSCI) stadium in the city. 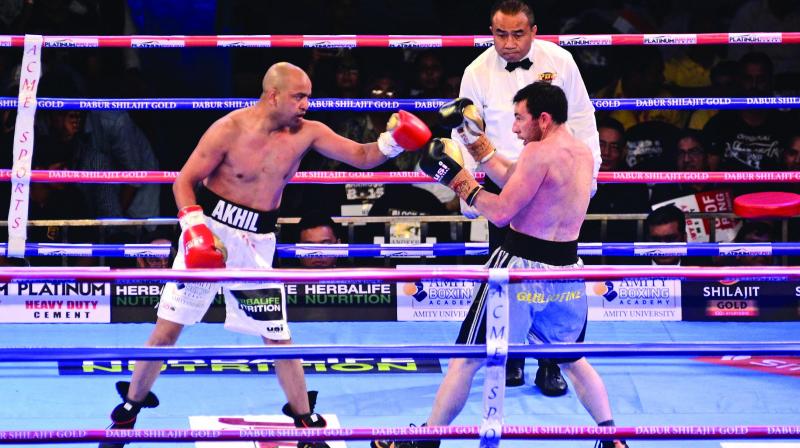 It was an emotional moment for Bhiwani pugilist Akhil Kumar at the NSCI Dome in Worli on Saturday. Much like Salman Khan’s character in Sultan who made his Pro Wrestling debut at the age of 40 in that famous movie released last year, Akhil came back to ring at the age of 36 and started his professional career with a knockout against an experienced Ty Gilchrist of Australia in the Junior Welterweight category.

Akhil was also a hot favourite to win a medal at the Beijing Olympics (2008) after his experience at 2004 Athens Olympics. He started in style by beating the 2005 world champion and then beat the reigning world champion and the world No. 1. But things didn’t go as planned in the quarterfinals and he missed the semis berth and hence a medal by a whisker.

If the disappointment of missing a golden opportunity to win an Olympic medal wasn’t enough, a spat of injuries followed to derail his amateur career. The 2006 Commonwealth Games gold medallist in Melbourne couldn’t defend the title in New Delhi in 2010. He made a comeback after the injury but he couldn’t make it to London Olympics. He made yet another comeback in 2014 but Rio was far for him. Now, he made his much-awaited professional debut along with fellow Beijing quarter-finalist Jitender Kumar. The duo was set to make  its debut last December but had to wait until Saturday for it actually to happen.

Akhil who is a deputy superintendent of police in Haryana and has taken a long leave to pursue his professional boxing dreams and was training hard at Gurgaon before the bout that lasted just two rounds. He received a thunderous applause from the Mumbai crowd that had gathered in numbers despite Vijender Singh’s fight being more than an hour away, to see a bald Akhil enter the professional ring. The cut in his left eye in the first round that left him bleeding did not stop the Bhiwani boxer from launching punches and counter punches to unsettle his opponents.  After the end of the second round Gilchrist couldn’t start again after being hit in the ribs and officials awarded the fight to Akhil on technical grounds.

“Age is just a number. There are many stars here who are 49, 53 and above and there is one who is double of my age but still is an inspiring star,” said Akhil whose later reference was apparently to Amitabh Bachchan who though made an entry after his fight.

Jitender dominated his fight against Thailand’s Thanet Likhitamporn in a lightweight contest. He seemed in hurry to finish in first round but Thanet somehow survived but he was badly hurt in the shoulder in the second round and had to rush all alone from the ring for medical treatment holding his shoulder as officials awarded technical knockout to Jitender.

Goyat’s ASI connection
It turned out to be a clean sweep for Indian boxers in the ‘Battleground Asia’ winning all eight bouts at NSCI Dome in Worli on Saturday. Vijender retained the WBO Asia Pacific Super Middleweight Champion title and also snatched WBO Oriental Super Middleweight Champion title from his Chinese opponent Zulpikar Maimaitiali in a ten round thrilling contest amidst chants of ‘knock the Chinese out — Chinese products don’t last long’.

Before Vijender’s fight, it was Neeraj Goyat who warmed up the audience, which had a galaxy of Bollywood stars including Amitabh and Abhishek Bachchan in
attendance. The 25-year-old boxer who trained at Army Sports Institute in Pune during his amateur days saw off a tough challenge from much more experienced Philippine boxer Allan Tanada. Goyat took 12 rounds to defend his WBC Asia Welterweight title with a hard-fought win that was ultimately decided unanimously in his favour by the judges — 119-109, 119-109, and 118-110. The Haryana boxer had first won the belt by defeating Australian Ben Kite in October last year.

Goyat first began boxing as a cadet at the ASI, Pune, back in 2006, and won the youth nationals a couple of years later. As a senior, he won silver medals at the 2011 National Games and the 2012 National Championships. Despite showing the promise he had to give up Olympic dreams to become a professional boxer a dream he had harboured from his early days at ASI. “I thank the Army Sports Institute. India se ek nahi, paanch Mike Tyson niklega” (there won’t be one, but five Mike Tysons emerging from India soon) he roared after the successful title defence.