Kashyap began on a high note, displaying power smashes against the 37-year-old Korean. 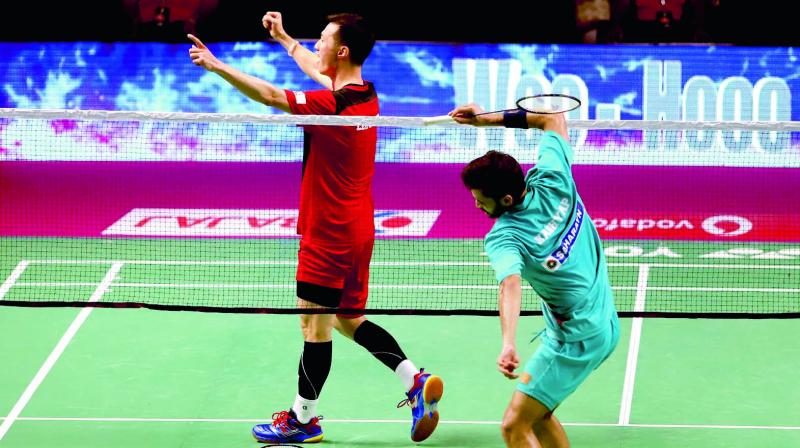 Hyderabad Hunters’ Lee Hyun-il celebrates his victory over Parupalli Kashyap of Awadhe Warriors in a PBL match in Chennai on Sunday. Lee won 13-15, 15-9, 15-14.

New Delhi: World no. 18 Lee Hyun Il registered a 13-15, 15-9, 15-14 win over Parupalli Kashyap to guide Hyderabad Hunters to an early 2-0 lead against Awadhe Warriors in the Vodafone Premier Badminton League at the Jawaharlal Nehru Indoor Stadium in Chennai on Sunday.

Kashyap began on a high note, displaying power smashes against the 37-year-old Korean. It was a treat to watch the way the Indian was moving on the court, which helped him bag the opening game after a tough fight.

In the second game, Lee got his act together and headed into the interval with an 8-3 lead. After the breather, Kashyap won three points on the trot to reduce the lead. However, Lee maintained his stronghold to force the match into the decider.

In the final game, Lee raced to an 8-3 lead and his combination of smashes, drop and deceptive cross court hits were too much the Indian to handle. Kashyap managed to save six match points, but Lee did not give him any chance of a comeback and cruised to win the match. Earlier, Hyderabad logged in the first point of the day after their men’s doubles pair of Markis Kido and Yoo Yeon Seong beat Or Ching Chung and Tang Chun Man 14-15, 15-6, 15-11.