The UMumba Volley skipper has faith in players to recover from two losses and make strong comeback in the Pro Volleyball League. 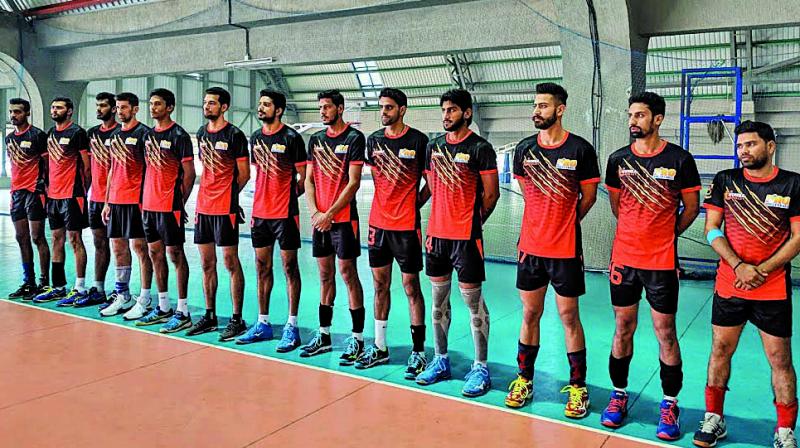 The U Mumba Volley team.

The U Mumba Volley hasn’t got off to an ideal start in the inaugural Pro Volleyball League but skipper Deepesh Kumar Sinha hasn’t pressed the panic button yet.

“I don’t think anything major went wrong and I can’t pin point at one thing as such but I guess we were a little slow in judging the opponents move and that’s what proved to be a drawback for us,” said Sinha.

This is a rather unfamiliar territory for USports management who own the team after they found instant success in Prokabaddi League and are doing reasonably well in junior football tournaments. But Sinha put up a brave front of making a strong comeback.

“The team has taken the losses as a lesson rather than a demotivation. Yes, we are working hard to make a strong come back and hopefully the next match will be our first win! Management is very experienced and professional as they have prior handled U Mumba Kabaddi and Football. They have handled and treated the U Mumba Volley team with utmost care too and that has helped us become a better team in many ways,” he added.

Sinha knows in a short league of three weeks they will have to turn things quickly with just three matches remaining to book semi-final berth. The team had tough matches against top teams, losing 4-1 to Kochi Blue Spikers and 3-2 to Calicut Heroes in Kochi. Now they will resume their campaign on Tuesday against Black Hawks Hyderabad after a good rest of six days.

“Time is never enough but we have to make the most of it. We have few intense training sessions and practise matches that help us to work on our weak points and make new strategies,” Sinha said.

The Chhatisgarh player has been rejoicing the experience in first ever Pro Volleyball League in India. “It has been such an overwhelming experience for me as well as the team as a whole. We are playing along and against some great national and international players and we are learning something new every day,” he said.

The Indian blocker felt it is a big platform for domestic players. “It is a very big platform for the players and will help increase awareness and competition amongst us. It also gives us a chance to play along side international players and that is a very huge exposure we will get. The league will help increase the following and fans for volleyball in India and till now, we have got very excited comments and reviews about the onset of the league,” said Sinha who will be playing all their matches in two southern cities Kochi and Chennai this season.

Sinha felt they have the arsenal to win the inaugural tournament. “We have a good and balanced team. A mix of both young and experienced players. We all are going to give our level best performances and hope to be the first ever winners of this league,” he said.

The Dantewada born player said the league has already made them stars. “Yes, we already have been getting a lot of requests for pictures when we are travelling or spotted outside of the ground. Our social media following has increased — players as well as the team account. Audiences are very excited to witness this sport in the form of a league for the first time in India,” he added.

The team had a pre-season training or two weeks “Our coaches Pritam (Singh Chauhan) sir and Naresh (Kumar) sir have been giving us a lot of tips and insights and helping us each build our strengths and work on weaknesses. They both believe that the U Mumba Volley team has huge potential to be champions,” he concludes.