Batista desperately wanted was to end his and the Game’s career, subject to his conditions. 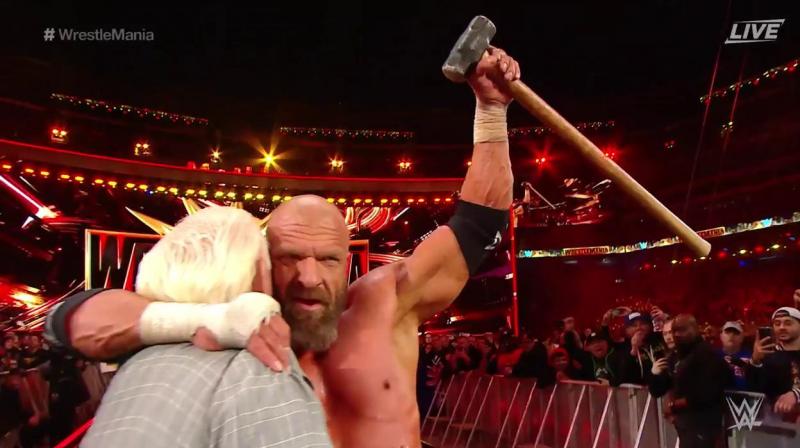 The two former Evolution members went on to headline ‘The Grandest Stage of Them All’ after The Game decided to put his in-ring career on the line. (Photo: WWE/Twitter)

New Jersey: When it comes to Wrestle Mania, Triple H and Batista are two proven champions, who have featured in the mega event more than multiple times. Triple H aka Hunter Hearst Helmsley, appeared in the biggest event 22 times, while Batista (David Michael Bautista) have main evented Wrestlemania six times, winning the event only three times.

Batista desperately wanted to end his and the Game’s career, subject to his conditions. The two former Evolution members went on to headline ‘The Grandest Stage of Them All’ after The Game decided to put his in-ring career on the line. However in one of the episodes of WWE RAW, the ‘Cerebral Assassin’ made it apparent that he wanted to hurt, humiliate and tease ‘The Animal’ (Batista).

One can simply not explain the gruelling and tormenting start to the match in which Batista received heavy smashing in his face with a toolbox, his fingers was turned backwards by a wrench and his nose ring was ripped from his nostril by a pair of needle-nose pliers. Despite the above mentioned ways, the two wrestlers went leaps and bounds to achieve their goals — Batista was effective but orthodox, while Triple H was ruthless and opportunistic — their shared likenesses came to the cutting edge at each turn.

There's nothing @TripleH won't do to save his career... and that includes RIPPING OUT @DaveBautista's nose ring!! #WrestleMania #NoHoldsBarred pic.twitter.com/0lyzWVulHF

Batista got up from a Pedigree, and The Game kicked out of a Batista Bomb. They also brought up a sledgehammer to put out each other; nevertheless HHH received some assistance from his old pal, Ric Flair. Following that, The Animal gave Hunter ‘a dose of his own medicine’, when he pedigreed Triple H. During that time Ric Flair drew Batista’s attention and trapped him, and assist The Game. “The Nature Boy’s” presence made The Animal take his eyes off his nemesis long enough to help ‘The King of Kings’ give him a hammer blow, and then only one Pedigree was enough to get it done and dusted.

And you may be pardoned for considering that the likenesses between The Game and The Animal finished with the pinfall — after all, there’s a clear line between winning and losing — but, in its own way, the conclusion might be examined as fulfilling to both of them. Presently, there truly isn’t anything Triple H hasn’t done. And Batista got precisely what he wanted.

Nevertheless, Batista will feature in the upcoming Marvel’s Avengers: Endgame where he plays the role of ‘Drax the Destroyer’ in Guardians of the Galaxy as part of the Marvel Cinematic Universe, where the Avengers will face off in a show down with Thanos, the Mad Titan.