The Croatian’s good work was undone by a sloppy service game as Sharapova broke once more to level at one-set all. 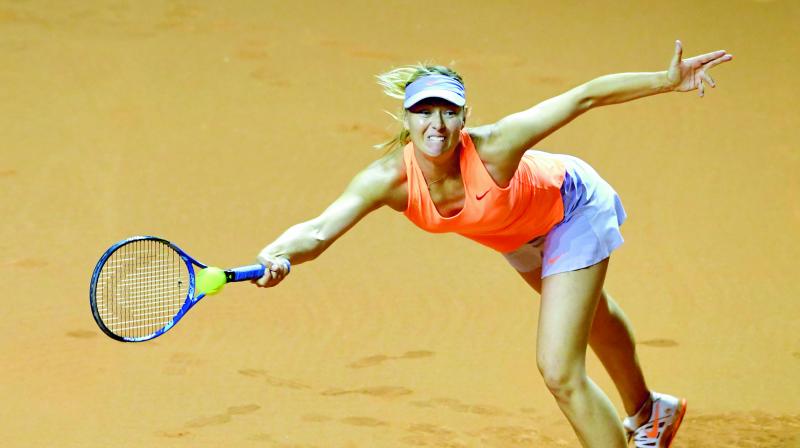 Maria Sharapova came back from a set down to defeat Mirjana Lucic-Baroni in the Madrid Open first round match on Sunday. (Photo:AP)

Madrid: Maria Sharapova set up a mouth-watering second-round clash with Eugenie Bouchard at the Madrid Open after battling back from a set down to beat Mirjana Lucic-Baroni 4-6, 6-4, 6-0 on Sunday.

Bouchard called the Russian “a cheater” last week and suggested she should have been banned for life — rather than 15 months — after testing positive for meldonium at the 2015 Australian Open.

The Canadian said she would “have a bit more motivation” against her former idol Sharapova after registering a first win on the WTA Tour since January with a 6-4, 4-6, 6-1 win over Alize Cornet.

After reaching the semi-finals on her return from her doping ban last week in Stuttgart, Sharapova showed impressive levels of fitness to dig deep after a tough couple of opening sets against world number 20 Lucic-Baroni.

There were four breaks of serve in the opening six games, but Lucic-Baroni was good value for her lead when she served out to take the first set.

Former number one Sharapova bounced back at the start of a gruelling second set that lasted over an hour by moving 4-1 in front. However, Lucic-Baroni held off four set points and then broke back for 5-4.

The Croatian’s good work was undone by a sloppy service game as Sharapova broke once more to level at one-set all. And there was no stopping the five-time Grand Slam champion in the decider as she dismissed a dispirited Lucic-Baroni for the loss of just 11 points.

World number two Angelique Kerber eased into round two with a convincing 6-4, 6-2 win over Hungary’s Timea Babos. Earlier, British number one Johanna Konta was knocked out in the first round by Laura Siegemund in the early hours of Sunday in a match that finished after 2am.

Konta appeared to have handled the long wait better as she took the first set 6-3. However, Siegemund battled back to take her winning streak to six matches, four of which have come against top 10 players, winning the final two sets 7-5, 6-4.