The conditions at Dover Strait in UK were deemed unfit for his body. 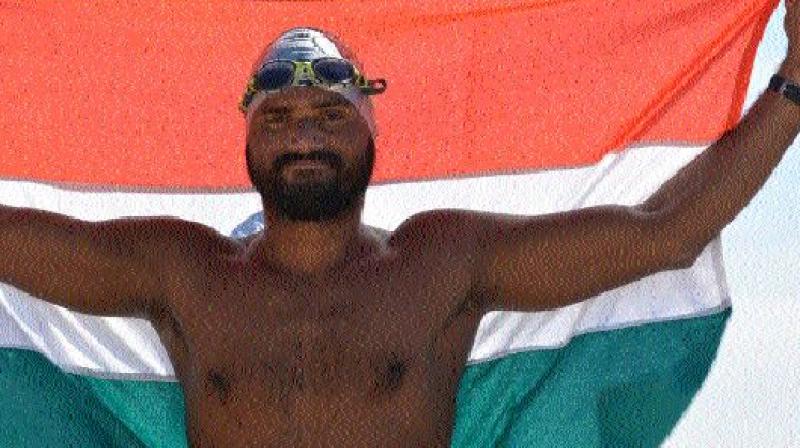 “My sole focus is to cross the English Channel on my own.” —Satendra Singh

He swam from Mumbai Prongs Reef Light House to Elephanta Island in a bid to conquer the English Channel. But the dropping temperatures and strong currents at the Strait of Dover were too demanding for the physically challenged swimmer who was more used to sprint swimming. The conditions at Dover Strait in UK were deemed unfit for his body.

He couldn’t sustain himself in the six hour qualifiers and was advised further training to cope with the conditions. The government employee holding a clerical post in Commercial Sales Tax, who had struggled for funds to go to England before he was supported by Tata Trust Mumbai and Bhopal-based IAS officer Parikipandla Narahari, saw his dream shatter. But despite 75 per cent paralysed body, Satendra wasn’t going to sit back and rue.

Despite having immobile lower limbs and being confined to wheel chair on land Satendra decided to keep using his upper limbs in water to show the world what he is capable of. He started preparing again for the next year from October at Deccan Gymkhana in Pune under coach Rohan More with his relay teammates Chetan Raut from Amravati, Rimo Saha of Kolkata and Jagdish Teli of Rajasthan.

The dream started again but funding was the problem. Tata Trust came forward again and the same IAS Officer but funding wasn’t enough for bigger dreams so the para-swimmers started crowd funding on social media. Meanwhile, the rigorous training continued in Pune as Satendra and Co worked on developing endurance and brave the low temperatures and currents they will face in English Channel. It was the first time that a team of para-swimmers were attempting to cross the English Channel. On June 24, the four swimmers crossed the Dover Strait of English Channel successfully in a relay team attempt. Before that he had participated in the 100m backstroke in Sheffield on May 26.

“I was working on endurance and physical fitness for six months in Pune. I had been a short distance swimmer having won three international and seven national medals in 100m breaststroke and backstroke but long distance takes a lot of hardwork. I had learnt my lessons last time around and worked on them in Pune,” he said. “For endurance I used to practice for two hours in the morning and evening and had prolonged sessions on weekends. In December and January I used to enter the swimming pool at 5 am to cope with low temperatures. Meanwhile we generated funds through crowd funding programme on social media. We covered the 36 km distance which expands to 45 km as tides change our way in 12 hours and 26 minutes,” he said.

Now Satendra wants to go solo to cross English Channel in the first week of August. He had to mortgage his home for prolonged stay in Dover UK where he celebrated his 31st birthday on Friday. “Now I have the confidence to swim through the English Channel in a solo attempt. I was successful in the qualifying event on June 30. I am training for six hours daily here at Dover Strait. I have received good support but funding wasn’t enough for a prolonged stay in UK so I had to mortgage my home in Gwalior after government refused to provide assistance. But my sole focus is to cross the English Channel on my own. now,” he said.