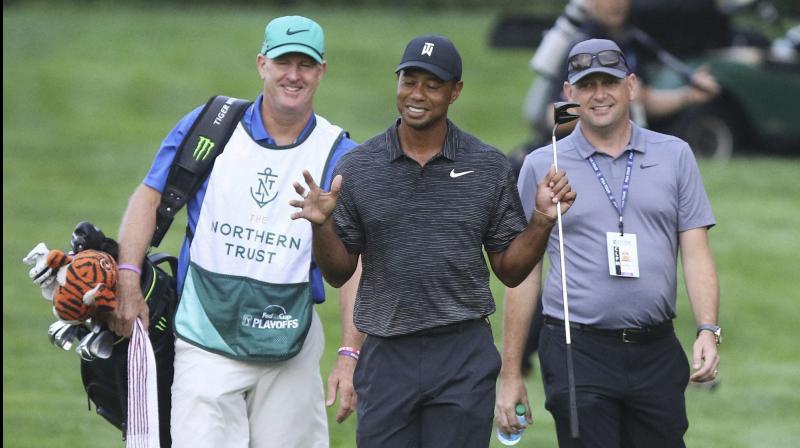 Tiger Woods gestures while talking to his caddie Joe LaCava (L) and an official during a practice round in Paramus, New Jersey, in 2018.

Los Angeles: A Florida man is suing Tiger Woods and caddie Joe LaCava over an alleged shove at the 2018 Valspar Championship and his lawyer asked witnesses to come forward.

Attorney Josh Dreschel, who represents Brian Borruso, issued a statement seeking the public's help in identifying voices on a video that appears to capture portions of the incident.

"We're asking anyone who was there to contact us and let us know if you saw the incident, if you know whose voices are on the video and if you may have video or pictures of the incident," Dreschel, of the St. Petersburg-based Josh Firm, said.

"Unfortunately, the PGA has refused to cooperate, even though we are confident they have the incident on video."

The lawsuit, filed on Tuesday in Florida's Pinellas County, claims the incident took place on the 13th hole in the third round of the tournament at Innisbrook near Tampa, Florida.

Woods hit his tee shot over the green and near spectators, including Borruso -- who tried to take a selfie with Woods in the background of the shot as the superstar approached the ball.

The complaint, seeking some $30,000 in damages, alleges that LaCava shoved Borruso into other spectators causing injuries.

Borusso's injuries were not specified, but the complaint says he went to the hospital, suffered loss of income and aggravated an existing health condition.

Woods was named in the suit because LaCava as the caddie's boss, the suit noting that the rules of golf state that a player is responsible for his caddie's actions during a round.

Woods's appearance at the 2018 Valspar Championship was just his fourth start in an official US PGA Tour event after spinal fusion surgery the previous April.

He finished tied for second behind England's Paul Casey, draining a 45-foot putt at the penultimate hole but unable to get a 37-footer to drop that would have forced a playoff.