The 30-year-old won the Para World Championship in Basel, having finished with a bronze in 2017 along with a silver in mixed event back in 2015. 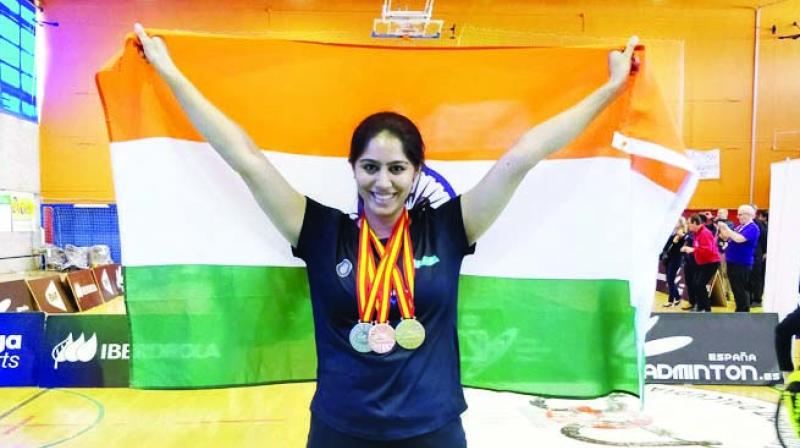 Kolkata: A “chance meeting” with Pullela Gopichand near an auditorium lift was enough for Manasi Joshi to convince the national coach of her burning desire to become a world champion. And rest as they say was history.

The 30-year-old won the Para World Championship in Basel, having finished with a bronze in 2017 along with a silver in mixed event back in 2015.

Manasi’s lower left limb, which was amputated after a road accident in 2011, couldn’t dampen her spirits as she started doing well at international events.

But what eluded her was champions’ luck and she needed a Dronacharya and who better than ‘Guru Gopi’.

A bank employee, Manasi vividly remember how she approached Gopichand to take her under his wings at his Hyderabad Academy.

“I was working at a bank in Ahmedabad, where we had a large auditorium. Once we had rented out the auditorium to sports university of Gujarat and Gopi sir was one of the speakers there,” the 30-year-old said.

Initially, she could not make up her mind whether to approach the legendary coach but her colleagues insisted that she must try and connect with him.

“As soon as I saw Gopi sir near the auditorium lift, I took a minute and told him about para-sport and about my sporting journey. The 2018 Para Asian Games in Jakarta was still months away and I told him how can I go about it. He was more than happy to welcome me at his academy in Hyderabad,” she recalled.

Thus began her journey at the Hyderabad academy, where she trained under coach J Rajendra Kumar, fitness trainer L Raju, who made her go through some strenuous training sessions as she was not able to run or to cycling. Indeed a painful regime that made her wince in pain.

She also got a new set of prosthetic implants, custom made for her in Hyderabad as Manasi fought against the odds to become world champion.