Chinki, first year student of a local college in Bhopal, developed interest in shooting during her school days. 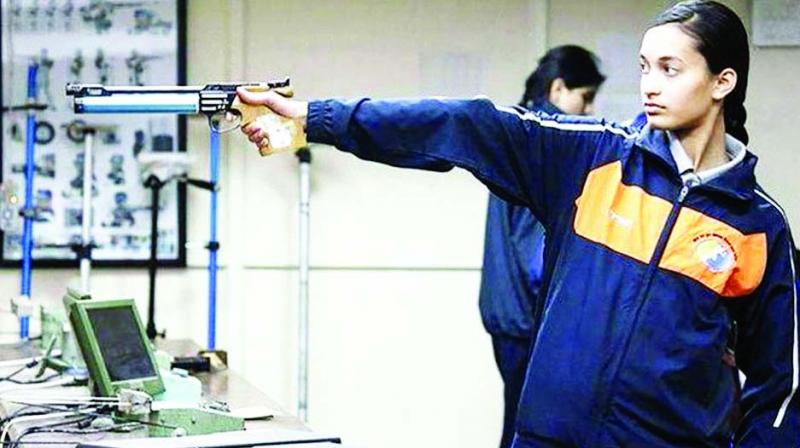 Bhopal: Chinki Yadav, daughter of an electrician working in the state sports department of Madhya Pradesh government, earned a berth at the Tokyo 2020 Olympics when she qualified for the finals of the women’s 25 metre pistol event at the ongoing Asian Shooting Championship in Doha, Qatar, on Friday.

Twenty one-year-old Chinki, a product of MP Shooting Academy, secured India’s 11th Tokyo Olympic quota in shooting with a career best qualification score of 588, bolstered by an exceptional 296, shot on Friday at the Lusail Shooting Range.

However, the national championship silver and junior world championship bronze-medallist, could not replicate her qualification form in the final, only managing a sixth-place finish with a score of 116.

“I feel like I am floating on cloud nine. It is my best ever performance”, Chinki, who has so far bagged eight junior national and world championship medals in her sports career spanning over eight years, told this correspondent from Doha.

“The qualification score of 588 is considered extremely good at the international level. She has a bright chance to clinch a medal at Tokyo 2020 Olympics in the event (Olympic World Record score in the event is 596)”, her coach Jaivardhan Singh who accompanied the India shooters’ team to Doha, told this newspaper.

Chinki, first year student of a local college in Bhopal, developed interest in shooting during her school days.

“My daughter has nurtured a dream to be an ace shooter since her childhood. She has a dream to win gold at the Olympics. I allowed her to join the summer camp organised in MP Shooting Academy in 2011, when she was in ninth standard. She won a medal (bronze) on her debut at the National championship in 2013 in the 25m pistol event and since then has never looked back,” her father Mehatab Singh Yadav recounted.

Chinki had hogged limelight when she won team bronze at the Junior World Championships in 2017.

India has faced drought in shooting events at the Olympics since 2012 when Gagan Narang and Vijay Kumar won bronze and silver respectively in London in different categories.