Star striker Sunil Chhetri felt that whether it was one or two leagues, more teams should participate in the domestic set-up. 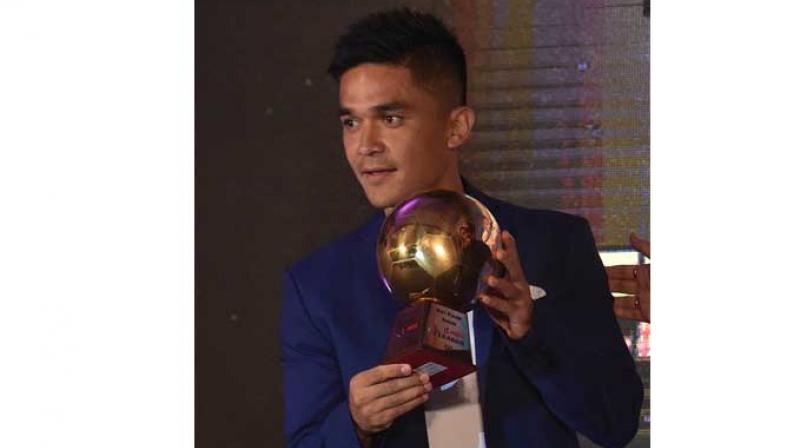 Sunil Chhetri received the Hero of the I-League award at the AIFF awards function. (Photo: PTI )

Mumbai: India’s national team members will be closely following the outcome of the meeting between I-League clubs and the All India Football Federation president Praful Patel in New Delhi on Saturday.

The meeting has been called to discuss a short-term future roadmap for Indian football, with the players’ future depending on its outcome ahead of the Asian Cup qualifier clash against the Kyrgyz Republic in Bengaluru.

Star striker Sunil Chhetri felt that whether it was one or two leagues, more teams should participate in the domestic set-up.

“If you ask me what’s ideal I’ve said it hundred times, more teams, one league. If there are 16, 17 or 20 teams playing in one league that will be the best. I don’t mind two leagues — the ISL and I-League — being held separately and at the same time as more players will get to play and will not be idle,” Chhetri, who received the Hero of the I-League (2016-17) said after the AIFF awards ceremony on Thursday.

AIFF’s special general body meeting was held here earlier but no consensus was reached on the format to be used for the 2017-18 season.

Chhetri however said they were focused completely at the moment on a “massive” match against the Kyrgyz Republic.

“We desperately want to win at home as they are the favourites and three points against them will boost our chances to qualify for the AFC Asian Cup 2019. It is a big hurdle for us but we are confident. We hope to put our best foot forward.”

India have climbed from 173 to 100 in the global rankings in the last two years under head coach Stephen Constantine but Chhetri didn’t read too much into that.

“Rankings are important to some extent as there are a lot of variables at play. But it is imperative for us to keep winning matches like we did against Myanmar, Puerto Rico and Nepal. As a player you never worry about the Fifa rankings, you put your head down and do the work.”

Goalkeeper Gurpreet Singh Sandhu, who received the 2016 Award for Special Recognition, added: “Rankings do matter but as players, our job is to concentrate on the pitch and give it our best. We don’t have to be cocky about winning seven games in a row, but aim to maintain our winning streak.”