The star U Mumba raider is now focussing on the senior nationals, as Maharashtra tries to defend their title. 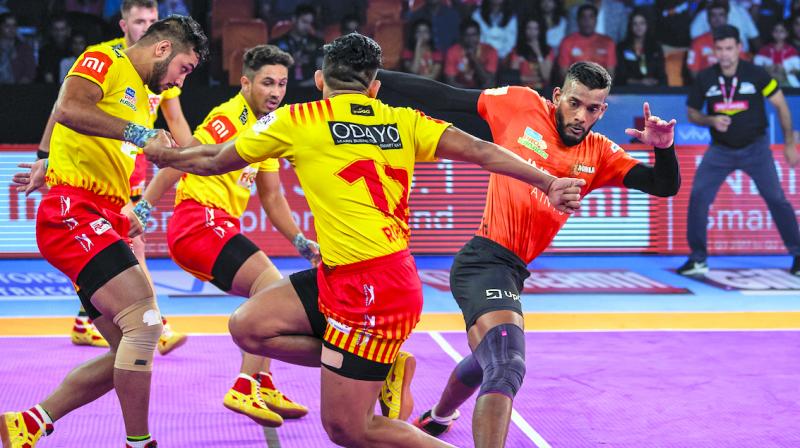 The State team won the national title after a gap of 11 year, pushing many players into limelight, including Desai.

At the start of 2018, Siddharth Desai was an unknown entity but he has travelled miles ahead since the start of new year. Desai was part of the Rishank Devadiga-led Maharashtra team that won the Senior National Kabaddi Championships in Hyderabad on January 6 last year.

The State team won the national title after a gap of 11 year, pushing many players into limelight, including Desai. Earlier, the 26-year-old wasn’t eligible to play in the Prokabaddi League as he hadn’t represented India and was over 22. But, being part of the national champions made him eligible for the Prokabaddi auctions this year, and he earned a whopping 36.4 lakhs from U Mumba franchise, owned by Unilazer sports  and promoted by Ronnie Screwvala. The price was much higher than his base price of eight lakhs in the C category.

“I had a great start to 2018 with a gold medal (for Maharashtra). I was itching to play against any team in the Prokabaddi League and expected not more than my base price in the auction. Then I was bought for 36 lakhs by home team U Mumba, which felt great. But I wasn’t under any pressure to perform. The coach (Gholamreza Mazandarai) made me feel at home,” he said.

Desai became a certainty in the star-studded U Mumba side and also became their star raider. He forged a strong partnership with fellow raider Rohit Baliyan and the duo performed consistently this season. The Kolhapur-based player became the fastest to get 50 raid points but an injury kept him out of a few games. Though fellow raider, Abhishek Singh didn’t let his absence be felt, Desai made a strong comeback and proved he is the best by becoming the fastest to reach 200 raid points later.

“The coach worked on my fitness and tried to improve my game. He focused individually on my training and kept pushing me. He had faith in my ability and skills,” he said.

The tall raider was however disappointed that his team didn’t go all the way, despite dominating the league for the major part and being invincible at home, where the final is to be staged on January 5. U Mumba topped Zone A before Gujarat Fortune Giants peaked to push them to second place at the end of the League. U Mumba had to play the Eliminator instead of the Qualifier and they suffered a loss. Devadiga led UP Yoddha to get a shock elimination.

“We had the best start and reached the playoffs. But UP Yoddha were in good form and we lost to them. Our defense made some mistakes and as a raiding side we were weak on the day. We tried hard to help the team win. Had we lost the game at the league stages, we could have made a comeback. But here, we had no chance,” he rued.

Desai and other U Mumba players couldn’t retain the same intensity towards the end of the three-month long Prokabaddi League and he admitted that the opposite team had figured out his game. “Teams have read me, I will have to change my game a bit and work on more skills,” he added.

The Maharashtra raider has no time to rest, as he will be attending the camp from January 10, ahead of the 66th Men’s Senior National Kabaddi Championships, to be held in Raigad district from January 28. His team will try to defend the national title.

“It has been a good, long season for me but playing for Maharashtra in the nationals is important. After that there is three-fourth month gap where I can rest my body fully,” he said.