Team Delhi finished in the third position with 26 points after grabbing four silver medals on the final day. 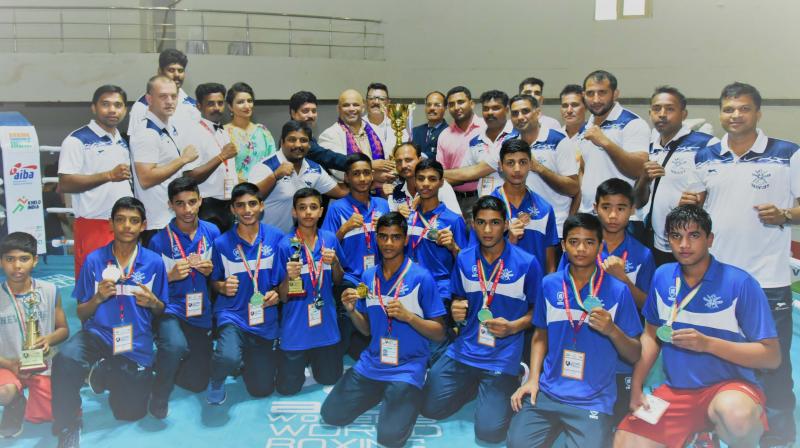 Services and Haryana dominated the final day of the 1st ever Sub Junior Boys’ Boxing Nationals with as many as 11 pugilists finishing on the top podium out of 14 categories at this prestigious national tournament held at the National Boxing Academy in Rohtak.

The most notable performance was from Services boy Neeru in 40kg against title favourite Karan Vats, who had proved his credentials last year when he won the silver medal at the School Nationals. However, the Delhi boy failed to repeat his heroics and went down to Neeru 1-4 to settle for the silver.

Following a commendable display at the Youth Nationals last month, the Services continued to shine and were declared the overall team winner with 65 points after their six victories in the finals. Harsh pitched in with a flawless 5-0 win over Delhi’s Rudra in 35kg. Vinay Viswakarma punched with gusto to edge a confident Lovi of Punjab 4-1 in the 49kg category.

There was no stopping Ashish who knocked out Chandigarh’s Ankit Kundu 5-0 in 52kg. Sunil Negi was equally impressive in 61kg as he sailed to a 5-0 result over Haryana’s Anke. In 70+kg, Randeep halted the run of Haryana’s Rhythm with a sublime 5-0 victory.

The highly-talented Yashwardhan Singh led five boxers to the gold to ensure a good finish for hosts, Haryana, who were the overall second-best performers with 54 points. Singh, a trainee at the NBA in Rohtak under the Khelo India scheme, demolished Manipur’s Chinglema Moirangthem 5-0 in 58kg in a fine display of his skills.

Preet Malik emerged a 4-1 winner over Services’ Henthoi Singh Mayengbam in 55kg while Gaurav Saini outshone Delhi’s Divanshu Godara 5-0 in 64kg. Naksh Beniwal registered a 3-0 win over Punjab’s Yorik Jindal in 67kg and Bharat Joon too brought delight for the home crowd with a 5-0 thumping of Maharashtra’s Abhiwardhan Sharma in 70kg.

Chandigarh, Goa and Punjab recorded a solitary win each to round off the 14 weight categories. Chandigarh’s Aryan had the toughest outing of the three as he had to dig deep for a narrow 3-2 victory over Services’ Nikhil Kumar in 37kg. He was awarded the best boxer of the Championships for his performance.

Team Delhi finished in the third position with 26 points after grabbing four silver medals on the final day.