Ali is also a devout Muslim who fasts during Ramadan even when he has physically demanding fights lined up. 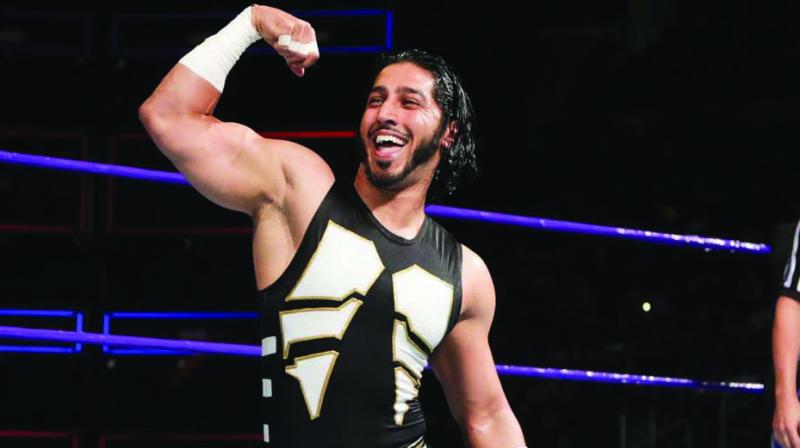 Toronto: While India and Pakistan are at loggerheads over dozens of disputes, an Indo-Pak fighter is shining bright in the WWE wrestling ring. Meet Adeel Alam, born in the USA to a Pakistani father and Indian mother, who is punching big time for the sub-continent at the world stage.

At 5-feet-10, the 33-year-old does not measure too high when compared to his six-foot-plus opponents but measures right up to them by capitalising on his own strengths. “Speed is my best friend in the ring, you just can’t catch me,” he says confidently. Much of that has to come from his being an officer with the Chicago Police for four years before turning a professional wrestler and adopting the ring name of Ali.

“My life is multi-layered. I have been chasing my dream of becoming a professional wrestler and was also doing ‘normal jobs’ along the way. I also had the passion for justice, to do the right thing and serve people, so I joined the Police. Eventually I got a call from the WWE asking me to attend a tryout and my career took a big turn there, in 2016,” he explains.

How did he get drawn to wrestling? “It’s all my Dad’s fault,” Ali jokes, before switching to a serious sentence. “As a child, I walked into the room while he was watching wrestling on television. He picked me up and sat me on his lap. I was hooked... saw these larger than life characters fighting it out — good vs evil, very easy story-telling, elaborate costumes and live action commentary, I just fell in love with it.”

Providence led him to the training ground in Chicago, his birthplace. “It’s a funny story. At high school we had a project where we had to give a speech about what we want to be. I got up and said ‘I want to be a WWE champion’ (he mimics a child’s tone). One of my classmates then said ‘hey, my older brother trains at a professional wrestling school in Chicago.’ He passed me the contact, I went to the Academy and they accepted me. I was 16 then. I actually trained for about six to eight months with them and then joined the minor leagues of wrestling known as The Independent Wrestling Circuit. It was a local event that built up my reputation in wrestling circles before I graduated to the bigger ones,” Ali recalls.

Ali’s mother initially resisted his moves. “My Mum’s a desi aunty, she’s like ‘you go to school beta, padhai karna’ (son, study well) and all. She was concerned about my physical well-being, had apprehensions about me fighting guys who were much larger. But over the years she’s seen me perform in the ring and so I have her blessings. My father unfortunately is no longer with us — he passed away — but he was a lifelong fan of wrestling and would always ask me to make sure I also had good education, something to fall back on, and that’s what I did,” says the father of two.

Ali is also a devout Muslim who fasts during Ramadan even when he has physically demanding fights lined up. “I do switch my routine a little bit as far as my schedules are concerned, and train at night. Sometimes I have to go out there and perform while I am fasting but I am used to it now. It is a gruelling process sometimes but I have seen that in the first couple of days your body adjusts,” he says.

Ali is also disappointed by the tension between India and Pakistan. “Oh man!” he exclaims. “So many families have been broken and lives lost over it. We are all brothers and sisters, it’s a shame that we have been fighting for so long. I see no difference between an Indian and a Pakistani. It’s about the heart, soul and what you want to be in this world. Where you are from is of absolutely no relevance to me. I don’t see borders, I don’t see countries,” elaborates Ali, whose father hails from Karachi and mother from New Delhi.

Having made his mark in the WWE, Ali has set higher targets in life. “My bigger goal is to break down the barriers that have been set for athletes coming from my cultural background, not in the WWE (where I am projected as the good guy in shows) but in the media, movies and everywhere. You see a brown guy with a name like mine always get cast as a bad one — he’s usually the villain, a terrorist or an evil foreigner who is out to harm America. All over the world people are welcoming those with different sexual orientation... I want the same to be extended to religion and culture,” he packs a powerful parting punch.