COVID19: Sport comes to a grinding halt around the globe 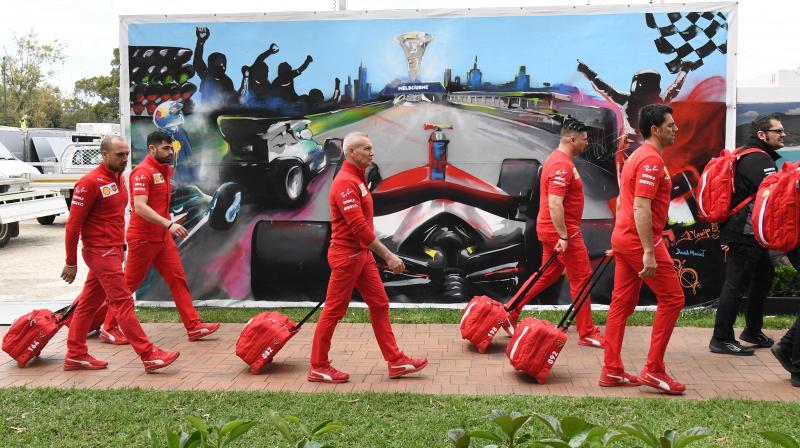 Members of the Ferrari team return from the pit to pack up their equipment after the Formula One Australian Grand Prix was cancelled in Melbourne on Friday, just hours before the action was due to start. AFP Photo

Melbourne: As thousands of fans queued to get into the Australian Grand Prix for the first Formula One weekend of the season, the teams and drivers were packing up to leave.

Concern over the coronavirus left organizers with little choice Friday but to cancel the season-opening race, particularly after McLaren's withdrawal because a team member tested positive for the COVID-19 illless.

Principals of nine F1 teams and organizers met overnight and “concluded with a majority view of the teams that the race should not go ahead," a joint statement by motorsport's governing body, local organizers and F1 said.

Meanwhile, Champions League football matches have been cancelled following four of the world’s leading sides have put themselves in self-isolation; the National Basketball Association (NBA) has put off all action for month; Association of Tennis Professionals (ATP) has suspended all tournaments for six weeks; PGA and LPGA Tours have decided to scrap the upcoming tournaments for the next three weeks and Cricket Australia has decided to play the one-day series against New Zealand without fans, while a women's tour to South Africa has been suspended.

In football, four of the world's leading teams (Real Madrid, Juventus, Chelsea and Arsenal) were in self-isolation Thursday that prompted the cancellation of Champions League matches for the first time, including the high-profile last-16 game between Manchester City and Real Madrid.

Arsenal's entire squad was in quarantine after its manager, Mikel Arteta, tested positive for COVID-19 late Thursday. Then, Chelsea announced winger Callum Hudson-Odoi had also returned a positive test for the virus on Thursday, meaning its full playing squad and coaching staff were self-isolating.

Earlier in the day, Real Madrid said its players were being placed in isolation after one of the club's basketball players, who share facilities with Madrid's soccer players, tested positive for the virus. That led to the instant decision by the Spanish league to bring matches to a halt for the next two rounds and, hours later, its Champions League match against Man City to be canceled.

Juventus' players, including Cristiano Ronaldo, were already in self-isolation after defender Daniele Rugani tested positive for the virus on Wednesday.

A month’s hiatus for NBA

NBA Commissioner Adam Silver said Thursday night that the league's hiatus because of the coronavirus pandemic will likely last at least a month, or roughly what would have been the remainder of an uninterrupted regular season.

“What we determined today is that this hiatus will be, most likely, at least 30 days," Silver said on TNT's “Inside The NBA" while making his first public comments since the league suspended play Wednesday night after Utah Jazz center Rudy Gobert tested positive for the coronavirus, or COVID-19. A second Jazz player, Donovan Mitchell, said Thursday that he has also tested positive.

The ATP suspended all men's professional tennis tournaments for six weeks while the WTA said Thursday it was calling off one event in April and would decide on any further changes to the women's tour schedule within a week.

After the men's tour said it would halt ATP Tour and ATP Challenger Tour competition until late April, WTA spokeswoman Amy Binder told The Associated Press the women's tour was not immediately prepared to do the same.

Australia's one-day series against New Zealand beginning in Sydney on Friday will go ahead but without fans, while a women's tour to South Africa has been suspended, Cricket Australia said.

"We believe this is the right decision to minimise the risk of public exposure to the coronavirus, which the World Health Organisation declared a global pandemic on Thursday," said CA chief Kevin Roberts.

PGA Tour shuts down for a month

The PGA Tour decided Thursday night to scrap the rest of The Players Championship and shut down its other tournaments for the next three weeks.

Commissioner Jay Monahan had said earlier Thursday there would be no fans at the TPC Sawgrass for the final three rounds, or at the next three tournaments on the PGA Tour schedule. The tour changed its mind late Thursday.

The LPGA Tour has postponed golf's first major championship of the season and two other events because of the coronavirus. The tour called off the Volvik Founders Cup in Phoenix on March 19-22, the Kia Classic in Carlsbad, California, on March 26-29 and the major ANA Inspiration in Rancho Mirage, California, on April 2-5.