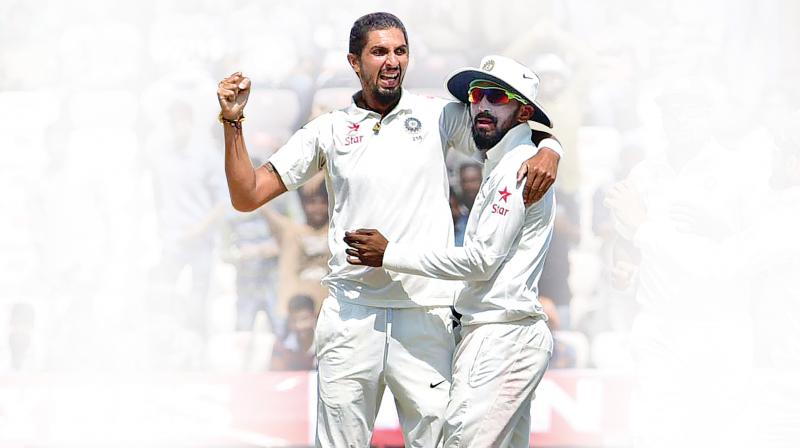 Hyderabad: Big Brother India bottled up Bangladesh on the final day of the one-off Test to record an emphatic win and extend their reign at the top of the Test table. The home side bowled out the visitors for 250 in their second innings to seal the game by 208 runs.

For India, it was a sixth successive series win since the one in Sri Lanka, 2015. It also meant 19 Tests without a defeat for Kohli & Co., who have registered 15 wins during the period.

The biggest positive for Bangladesh, who have very little Test experience, was lasting 100 overs in both their innings and taking the match almost into the final session. The last time they played over 100 overs against India was in the Dhaka Test of 2000.

All that Bangladesh had hoped for on the final day came crashing as left-arm spinner Ravindra Jadeja struck in the ninth minute with the 15th ball of the morning session. The seasoned Shakib Al Hasan was caught at forward short-leg by Cheteshwar Pujara after adding only one run to this overnight score of 21.

India kept trying things in an attempt to get into the Bangladesh tail and made four attempts to get the ball changed. They were successful on the fifth attempt though.

Another change did the trick. Ravichandran Ashwin struck with the fourth ball he bowled in the day. First innings centurion and Bangladesh captain Mushfiqur Rahim caught by Jadeja at cover while trying to hit the off-spinner over the field, a shot he would surely rue. Rahim made 23 in the 65 minutes he hung around at the wicket. Rahim had put on 56 runs for the fifth wicket with Mahmudullah and looked good in fending off the Indian attack for most part of the innings until that sudden urge to clear the in-field. That was a body blow for the visitors, who had lost half the side and did not have much of a batting to come.

Going into lunch at 202/5, Bangladesh had quite a challenge on hand — to last two more sessions with just the lower half in the game.

Sabbir Rahman put his head down and did his best to block balls. He and Mahmudullah had put on a patient 51-run stand for the sixth wicket before Rahman fell, trapped leg before wicket by pacer Ishant Sharma, who was now extracting good bounce off the wicket.

He could not cash in on a reprieve while on 61 though, when wicketkeeper Wriddhiman Saha missed a stumping chance as he could not cleanly gather a ball from Jadeja.

First innings half-centurion Mehedi Hasan was another batsmen to experience a lucky 13 as Murali Vijay dropped a sitter at first slip off Ishant Sharma.

However, at 230/7, Bangladesh were all but out of the match. Wicket numbers eight, nine, ten fell in no time to spark celebrations in the stands.