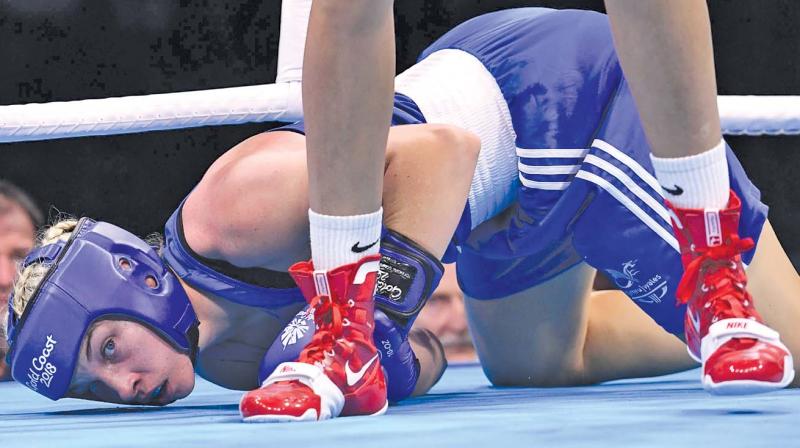 Gold Coast: It is a choice that many sports fans would love to have: play football for your country at a World Cup or be a boxer at the Olympics.

That was the dilemma facing Lauren Price, and her decision to plump for boxing paid off on Friday when she won her semi-final at the Commonwealth Games to secure at least silver for Wales.

The multi-talented 23-year-old can make it gold and a Commonwealth title if she beats Australia’s Caitlin Parker at the Gold Coast in their middleweight clash on Saturday.

Price, who was also a kick-boxing champion, has no regrets about ditching her football career as a tenacious defender with Cardiff City and the Welsh national side.

“I had 52 caps for Wales and I played my last game against England — we lost — and I stopped when I got selected (for boxing) for the Commonwealth Games in Glasgow (2014),” Price said.

“Obviously I couldn’t do both at a high level.”

Price went on to win bronze at the Glasgow Commonwealths and then joined the GB Boxing programme, where fighters receive intensive, full-time training for the Olympics, her ultimate aim.

The football — in which she had also been captain of the under-19 Welsh women’s side — had to go.

“It got to the point where I had to pick one,” Price said, after earning a unanimous points decision over the awkward Tammara Thibeault of Canada to set up Saturday’s gold-medal showdown.

She has the talent but not the inclination to return to football any time soon, if ever.

Price is not the only female boxer who was also a talented footballer.

And Natasha Jonas started out playing football before representing Britain at the London 2012 Olympics in the boxing ring. She is now an unbeaten pro boxer too.

So is there anything in football that can be taken into the boxing ring?

“Katie Taylor is one of the best around and as an amateur (boxer) she was very quick on her feet and that’s kind of my style too,” said Price, who is primed for “one hell of a fight” against Parker.

The two know each other well having sparred three times in the build-up to the Commonwealths.

“We know each other inside-out so it’s going to be a test tomorrow,” said Price. “But I’ve definitely got it in me to bring back gold.”