'I'd like to take this chance to apologise ... to absolutely nobody,' McGregor roared before taking his two belts. 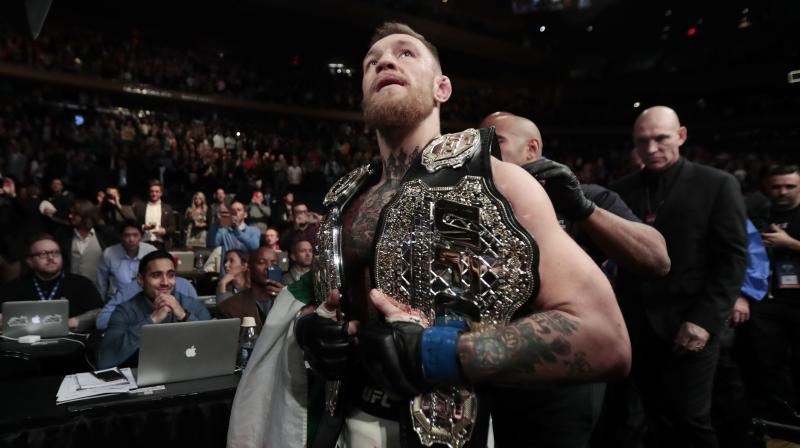 Alvarez had won the title from Rafael Dos Anjos back in July and after McGregor was done avenging his only UFC defeat to Nate Diaz. (Photo: AP)

Southpaw McGregor downed Alvarez three times in the opening round, leaving the champion stunned and on the back foot for the entire five minutes, and it didn't get any better for the Philadelphia native.

Alvarez's attempts to take the fight to the mat were thwarted by the 28-year-old, who continued to dictate the pace in the second in front of a packed house, most of whom were cheering for the Irishman.

Midway through the second round McGregor unleashed another combination and this time there was no way back for Alvarez as McGregor pounced to finish the fight.

"I'd like to take this chance to apologise ... to absolutely nobody," he roared before taking his two belts and scaling the side of the octagon to celebrate.

The 32-year-old Alvarez had won the title from Rafael Dos Anjos back in July and after McGregor was done avenging his only UFC defeat to Nate Diaz, he immediately set his sights on taking that second belt.

With the ban on mixed martial arts in the state lifted in March of this year, the UFC returned to New York after an absence of over two decades, staging a card stacked with fights and backed up by a ton of hype.

While others on the bill failed to live up to it, McGregor once again proved his value to the UFC by putting on a spectacular show with another superb knockout win to go with his 13-second defeat of Jose Aldo for the featherweight crown.

Earlier in the evening women's straw-weight champion Joanna Jedrzejczyk weathered a late storm from her Polish compatriot Karolina Kowalkiewicz, holding on to win a unanimous decision after an epic five-round battle.

In the other title fight on the card, welterweight champ Tyrone Woodley thought he had seen off the challenge of Stephen "Wonderboy" Thompson to claim a narrow split decision, but the result initially announced in the octagon was corrected after several minutes and changed to a majority draw.