IBF African champion Cheka, who has lost all his bouts outside Tanzania, tried to demoralise Vijender by undermining his Olympic medal. 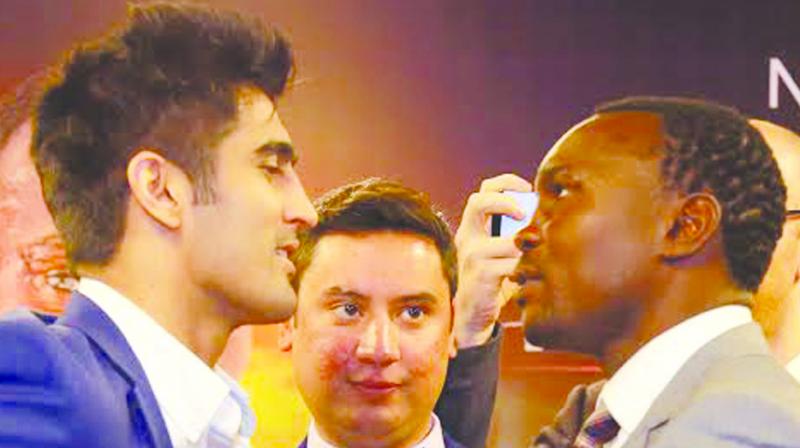 Vijender Singh and Tanzania’s Francis Cheka ahead of their fight for the WBO Asia Pacific title in New Delhi on Tuesday.

New Delhi: The build-up to Vijender Singh’s WBO Asia Pacific title defence bout against Tanzania’s Francis Cheka reached another level on Tuesday as both boxers looked each other in the eye and became involved in a heated war of words, vowing to knock the other out come Saturday.

Giving Cheka’s track record little importance in a pre-event face off here, Vijender said, “December 17 night will decide the kind of preparations that I and my trainer Lee Baird have put in. I don’t care who my opponent is. I am 110 percent ready to take on Cheka. I will show him who is the best.”

IBF African champion Cheka, who has lost all his bouts outside Tanzania, tried to demoralise Vijender by undermining his Olympic medal.

Vijender, who out-punched Australia’s Kerry Hope to earn the title in July this year, promptly responded. “Should I give it in writing or deliver a punch to Cheka to tell him that he is in troubled waters now,” said the 31-year-old from Haryana.

Vijender has won all seven bouts he has fought, with six knockouts, in his professional career so far, while Cheka has 35 professional bouts under his belt. “Vijender has fought only one bout which went to 10 rounds, but I have been involved in a number of 10-rounders. So, he is just a child as far as pro boxing is concerned,” Cheka added.