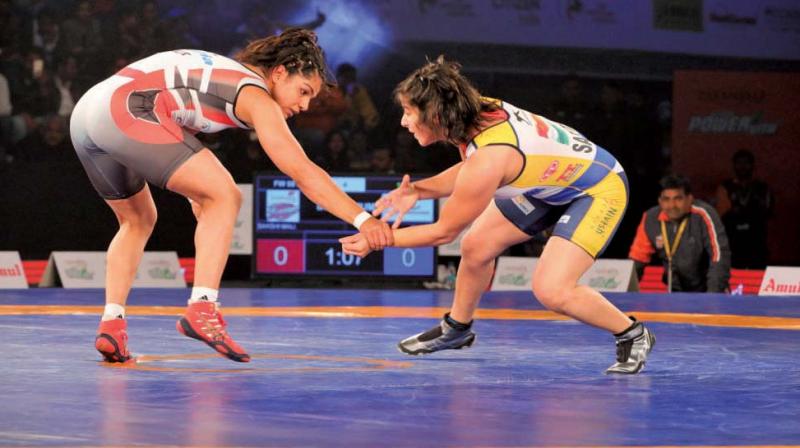 Mumbai Maharathi held their nerve to prevail 4-3 over Colors Delhi Sultans at the KD Jadhav Indoor Stadium here on Friday. The win also ensured that they would enter the semi-finals of Pro Wrestling League Season 2.

The opening bout between Delhi’s David Tlashadze and Pritam in the 70 kg men’s saw the Georgian wrestler dominate from the start in a 6-2 win.

Three-time Olympian Mariya Stadnik, Delhi’s prize catch, made short work of Carolina Castillo Hidalgo as Delhi won the second bout 5-0 to move 2-0 ahead in the tie. Azerbaijan’s Stadnik pinned her opponent to the mat and won by fall in the 48 kg women’s category.

Mumbai Maharathi earned their first win thanks to the strength and technique displayed by 2016 Olympics bronze medallist Jabrayil Hasanov against Parveen Rana in the 74 kg men’s bout. Although Rana attacked Hasanov resolutely, the Azerbaijan-born’s solid defensive techniques denied any points before Hasanov took down his opponent to win 7-0.

Sakshi Malik displayed her superiority on the mat beating Mumbai Maharathi’s Sarita 3-1 in the 58 kg women’s bout to again open the lead for Delhi before Mumbai’s Vikas took down Surjeet Grewal in the 65 kg men’s category by a comfortable 15-8 margin.

Mumbai captain Erica Wiebe set up the tie for an exciting finish as she clinched the sixth bout defeating Delhi’s Alina Makhynia 3-0 in the 75 kg women’s category and it was left to the 97 kg heavyweight men’s bout in which Mumbai’s Pavlo Oliynik outpointed Satyavart Kadian of Delhi 8-3 to send his team into the last four.