Russian Soslan Ramonov won the final bout to earn Mumbai, a consolation win and to reduce the margin of defeat. 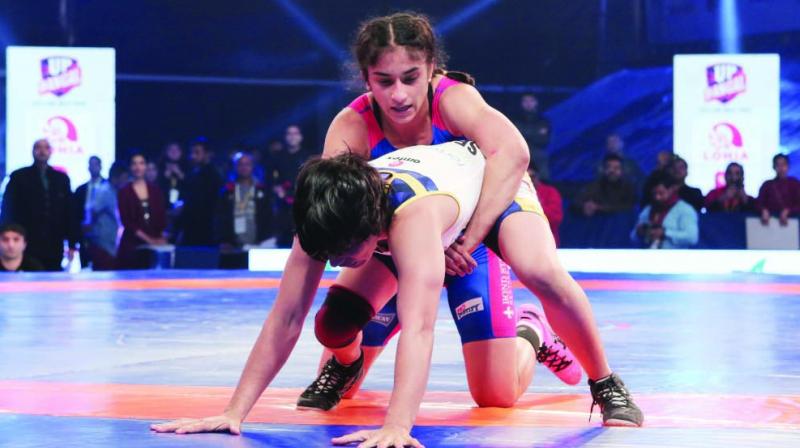 Mumbai Maharathi put up quite a spirited display, but suffered a couple of hiccups and went down fighting 3-4 to UP Dangal in their  second match of the 3rd Pro Wrestling League, at Siri Fort Sports Complex, New Delhi on Saturday night.

Olympian Sakshi Malik, who won the bronze medal at the 2016 Summer Games and Satyawart Kadian, won their respective bouts but they could not stop UP Dangal from clinch the win. Russian Soslan Ramonov won the final bout to earn Mumbai, a consolation win and to reduce the margin of defeat.

Mumbai Maharathi, who had defeated Delhi Sultans earlier this week, found the going tough as they lost the opening two fights. Yatsenko Andrey of Ukraine suffered a close 3-4 defeat to UP Dangal’s Nitin in the 57kg category and later Vinesh Phogat as expectedly easily defeated Seema 10-0 in the 50kg bout to extend UP’s lead
to 2-0.

However, a determined Mumbai roared back to win the next two bouts to level the scores. In the third fight of the evening, Mumbai’s Kadian was fully in control and hardly offered much of a chance to UP’s wrestler Vicky to score a comfortable 10-2 win to cut the lead.

Later, Mumbai’s star wrestler Sakshi Malik stamped her supremacy as she outclassed Reshma Mane, who replaced Geeta Phogat after the latter had pulled out stating that she was injured and not prepared for the 62kg category bout. The highly experienced Sakshi did not encounter any opposition from Reshma and after leading 8-0 went on to close out the fight, winning 16-0 and level the match scores at 2-all.

However, Mumbai encountered a setback in the next as Veer Dev sustained an injury during the 74kg bout against UP Dangal’s AbduraKhmonov Bekzod of Uzbekistan. He received treatment, but unfortunately he could not continue after the injury and AbduraKhmonov won 12-0 and Mumbai once again fell in arrears 2-3.

In the sixth bout, Nigerian Odunayo Folasade Adekuoroye provided Mumbai some hope of a fight back when she led 3-0 against Vanesa Kaladzinskaya of Belarus in the 57kg fight. But, she seemed to tire a bit and allowed Vanesa to make a comeback to take the bout 7-5. That win secured UP Dangal’s victory.

In the final bout of the night, Russian Ramonov of Mumbai Maharathi defeated Bajrang Punia 3-0, which helped his team to go down narrowly by overall 34-37 points.

Mumbai Maharathi’s next round match is against Veer Maratha’s on Wednesday, January 17.