Commonwealth Games: It’s a CWG medal for Mary at last

“If I am still super-fit in another year I will try,” she added of another tilt at a maiden Olympic gold. 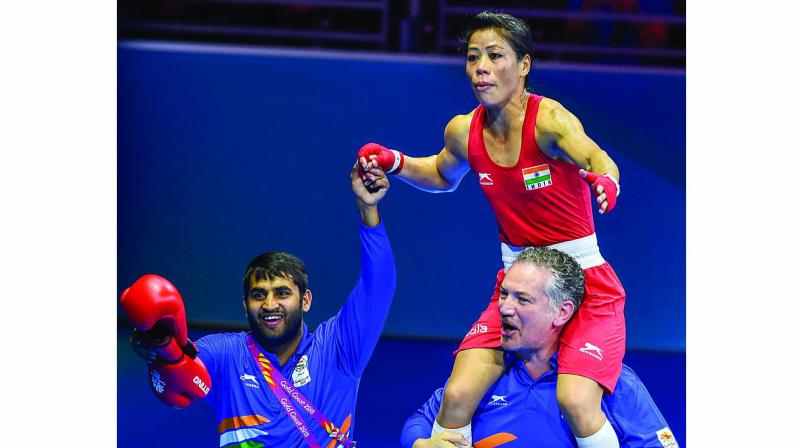 Gold Coast: Indian boxing star Mary Kom opened up on the heartache she faced returning to competition after having children as she captured her first Commonwealth Games title on Saturday at the age of 35.

Mother-of-three Kom, the subject of a Bollywood film in 2014, won a unanimous points decision over Northern Ireland’s Kristina O’Hara in their light-flyweight final on Australia’s Gold Coast.

It is Kom’s first Commonwealth medal of any colour and burnishes a trophy cabinet that already includes an Olympic bronze from London 2012 and five amateur world championship titles.

The trail-blazer, known in India as “Magnificent Mary”, celebrated with a victory parade on her coach’s shoulders and she had tears in her eyes afterwards.

Kom, devastated not to gain a wildcard for the 2016 Rio Olympics, gave mixed signals about whether she would now target the Tokyo 2020 Games and a first Olympic gold.

“That is difficult to say, but I will try,” said Kom, who is already older than most of her opponents.

Part of the problem is that at the Olympics there is no light-flyweight category, meaning Kom would have to step up to flyweight, which would mean fighting bigger and stronger opponents.

“If I am still super-fit in another year I will try,” she added of another tilt at a maiden Olympic gold.

Joining her in the gold rush were Gaurav Solanki (52kg) and Vikas Krishan (75kg) as the team rejoiced their best ever CWG medal haul.

India return home with nine boxing medals from the current edition, two more than their previous best at the 2010 Delhi Games.

“Credit to the boxers for the way they fought, even those who lost gave fighting performances,” India’s high performance director Santiago Nieva said.