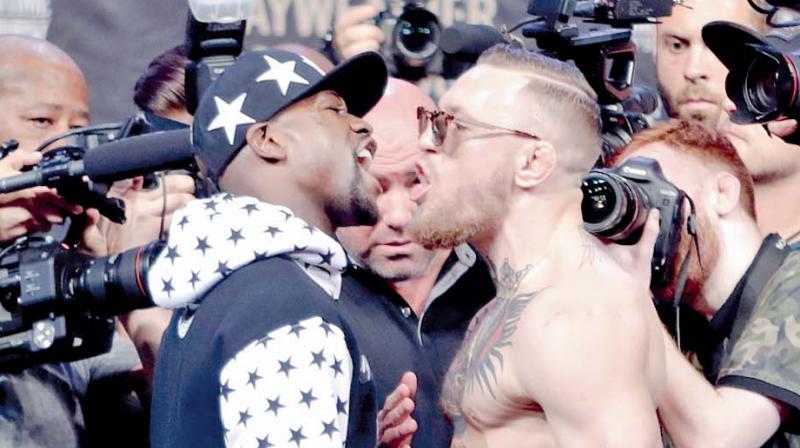 The Floyd Mayweather (left) vs Conor McGregor duel has drawn parallels with the Muhammad Ali-Antonio Inoki fight in Tokyo in 1976. (Photo: AFP)

Los Angeles: There are many in the boxing world who are appalled by the prospect of Floyd Mayweather and Conor McGregor climbing into a ring next month.

Bob Arum is, emphatically, not one of them. After more than half a century in the fight game, the legendary 85-year-old promoter often gives the impression of a man who has seen it all before. And when it comes to cross-code duels in the vein of Mayweather-McGregor, he has.

That shambolic night at the Nippon Budokan arena on June 26 1976 saw Inoki spend most of the bout on his back, attempting to kick out at Ali’s legs. Ali meanwhile threw only six punches in 15 rounds of farce.

The spectacle is widely seen as a tawdry lowpoint in Ali’s glittering career, a cynical, no-holds-barred grab for a multi-million-dollar payday.

Or as Arum remembers it: “It was the most atrocious crap that I’ve ever put on.”

The contest had been born a year earlier when Ali met Ichiro Hatta, the president of the Japanese Amateur Wrestling Association, and mischievously lamented about the fact that he had never faced an Asian challenger.

The remark caught Inoki’s attention and soon Ali was being offered $6 million to fight the Japanese wrestler.

Arum recalled a fruitless attempt to hash out the ground rules for the fight between himself, Ali’s trainer Angelo Dundee, manager Herbert Muhammad and Inoki’s handlers.

“I spent two weeks in a conference room in Tokyo, with the Japanese, trying to get rules for that fight. And in the end we went into that fight without any rules at all,” Arum said recently.

“Inoki spent most of the fight on his back kicking out at Ali. There was one round where he stood up and Ali threw a punch and he missed him by two feet. By two feet! Because Ali was frustrated. But Inoki staggered back into the ropes like he’d been hit. It was ridiculous.”

According to Arum, the plan had initially been to concoct a stage-managed conclusion to the fight that would have kept all sides happy. US wrestling promoter Vince McMahon came up with a narrative that would have seen Inoki declared the winner while Ali could claim a moral victory.

“Vince figured out a scenario, which I didn’t take that seriously, where Ali would get Inoki on the ropes,” Arum said.

“And Inoki as a professional wrestler, would have a razor in his mouth, and he would cut his own eyebrow, so he’d be bleeding and everything. And Ali would have him on the ropes and ask the referee to stop the fight, and the referee would refuse.

“And eventually Ali would turn his back on Inoki and plead with the referee to stop the fight. At which point Inoki would jump on Ali and get him to the canvas and the referee would count ‘1-2-3 out’ and declare Inoki the winner.

“And then Ali was supposed to yell ‘It’s another Pearl Harbor!’. But Ali got spooked when he got there and he wouldn’t go through with it. So after that we spent two weeks trying to figure out what the rules would be. And we couldn’t come up with anything.”

Memories of Tokyo perhaps explain why Arum is unwilling to join the legions of critics who have disparaged Mayweather and McGregor August 26 fight as being “bad for boxing.”

“The idea of whether its good for boxing is sort of irrelevant. I don’t even know what ‘Good or bad for boxing’ means. It really has nothing to do with boxing. It’s a spectacle. And people will either watch it or they won’t. And that’s why those kind of questions bother me because nobody is putting a gun to anybody’s head,” Arum said.