The Golden State Warriors dug deep to defeat the New Orleans Pelicans while the Cleveland Cavaliers demolished the Memphis Grizzlies. 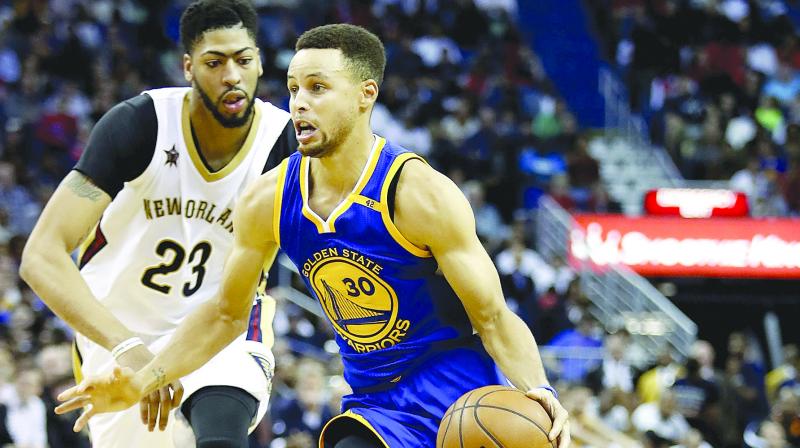 Los Angeles: Stephen Curry scored 30 points to win his duel with Anthony Davis as the Golden State Warriors dug deep to defeat the New Orleans Pelicans while the Cleveland Cavaliers demolished the Memphis Grizzlies on Tuesday.

Reigning NBA MVP Curry’s haul in a 113-109 victory included five three-pointers as well as four rebounds and seven assists to boost the Warriors to 22-4 for the season.

Davis, second only to Russell Westbrook in the points scoring charts this season, averaging just over 30 per game, scored 28 points in the Pelicans’ losing effort.
Davis also pulled down eight rebounds and produced three assists but ultimately the Warriors had too much firepower for the home team.

Kevin Durant added 27 points for the Dubs while Klay Thompson finished with 17 and Draymond Green made his first triple double of the season — 12 points, 12 rebounds, 10 assists. Green also single-handedly stifled Davis in the final 4:48, preventing the Pelicans from making a single field goal.

Love spurs Cavaliers
In Cleveland, Kevin Love scored 29 points as the Cavaliers shrugged off the absence of Kyrie Irving to down the Memphis Grizzlies 103-86.

Irving was given the night off after complaining of tiredness in his legs after last weekend’s victory over the Charlotte Hornets.

But the 24-year-old point guard’s absence was barely felt as Cleveland romped home thanks to Love and LeBron James, who chipped in with 23 points, eight assists and six rebounds.

Love also contributed 13 rebounds, while J.R. Smith filled the void left by Irving to weigh in with a 23-point haul which included six three-pointers.

The victory saw the NBA champion Cavaliers improve to 18-5, tightening their grip at the top of the Eastern Conference standings.

Zach Randolph led the scoring for the Grizzlies with 18 points and five rebounds as the visitors rested All-Star centre Marc Gasol.

Andrew Harrison and Troy Williams scored 13 points for Memphis who fell to 17-9.

Cavaliers coach Tyronn Lue said afterwards he had purposely chosen James and Love on Tuesday, rather than split the duo up over the two games.

“We’re home to play in front of our fans... So, with two of the Big Three, I know we can win that game,” Lue said.

Grizzlies coach David Fizdale bemoaned a second quarter performance which saw his team fall behind by 22 points at one stage.

Timberwolves maul Bulls
In Chicago, the Minnesota Timberwolves overturned a 21-point deficit to stun the Bulls in a 99-94 upset.

Zach Lavine scored 24 points while Andrew Wiggins added 23 as Minnesota chalked up an unlikely road victory to improve to 7-18 for the year.

Butler had hauled Chicago back into the contest with a fade-away jumper that tied it up at 91-91 with 1:34 left.

But Lavine, Wiggins and Ricky Rubio combined for an eight-point run to give Minnesota an unassailable lead.