Don’t want my record to be broken: Mike Powell

Powell’s world record, which is standing tall since August 1991, makes him the fourth person since 1900 to hold the long jump mark for over 20 years. 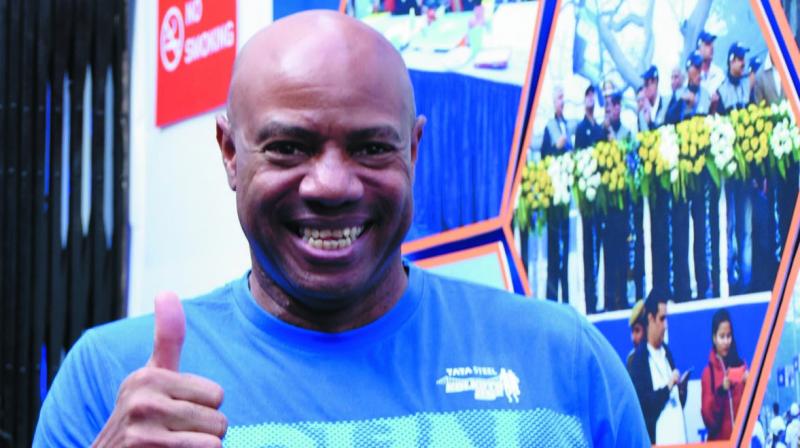 Kolkata: Athletics great Mike Powell on Thursday said is “proud” to hold the long jump world record for 27 years but believes he could have increased his margin even further.

Powell’s world record, which is standing tall since August 1991, makes him the fourth person since 1900 to hold the long jump mark for over 20 years.

“I don’t want to see my record broken… It will hurt me. The long jump is the hardest event in track and field. You have to have a sprinter’s speed and then go up in the air and land safely. It’s difficult to get that transition from horizontal speed to vertical lift. That, rather than speed, is the trick,” Powell said here.

“I would have loved to jump 9.20m. But after you become the world champion, your focus changes. Before setting up the record I was hungry, but after that I wanted to do too many things. If I finished above 9.10m, I would have been a more satisfied man.”

Powell, who is in the city as the international event ambassador of the TCK 25K, to be held on Sunday, said the competition will be fierce with world champion Keninsia Bekele leading the line-up.

“It is a definite plus to have Keninsia Bekele here. It will be a great race and we will witness some great competition on the day. It is pleasing that India is beginning to have the top-notch races. Personally, I am glad to be a part of it,” the 54-year-old said, who is based in Los Angeles.

“Losing out twice at the Olympics still hurts. He (Lewis) beat me with his mind. And I allowed him to do that. He can’t do it now, back then he did. He’s a master. Till I retired, I was so hard on myself because I didn’t get an Olympic gold.”

Asked who would he rate as the greatest athlete ever, he said: “Carl Lewis is of course one of the greatest. Usain Bolt has been so dominant in the last few years. I think if he trained for long jump, he would have made 9m. And then there is Jessie Owens. He broke four world records in one afternoon. I would put all three up there.”