Hero unveiled its RR 450 rally bike at the event. 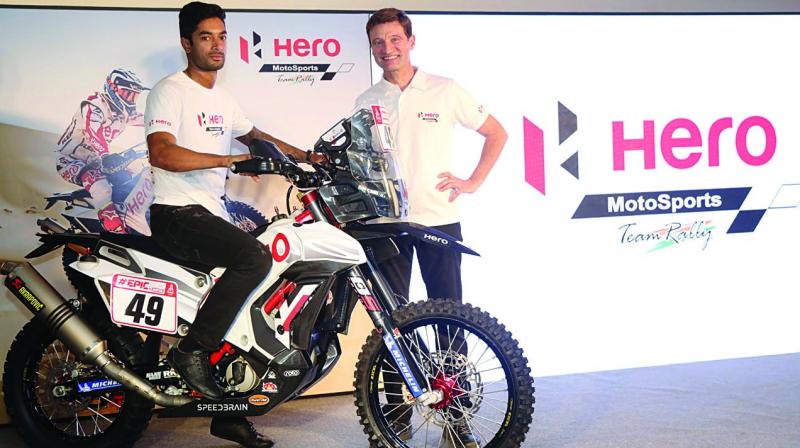 New Delhi: Experience of past three years has made him worldly wise about the Dakar Rally, enabling him to target a top-20 finish at the off-road race’s 2018 edition, believes biker C.S Santosh.

Santosh will be part of a three-member Hero Motorsports team, including Joaquim Rodrigues and Oroil Mena, who was inducted in the team in September and will make his debut at the Dakar.

The 40th edition of the race, the 10th to be held in South America, will cross three countries, beginning with Peru on January 6, 2018, and travel through Bolivia before concluding in Argentina on January 20.

Peru will be the host after a gap of four years with 500 competitors from 60 countries participating in the event, hoping to tame a gruelling stretch of almost 9,000 kms.

“I struggled a lot last time. I wasn’t in good physical shape. They say Dakar is tough every year and that is true. But I have matured and experience teaches you great things,” Santosh said here on Wednesday.

“I hope to be in the top-20 this year though finishing the race will be an achievement in itself. I am satisfied with this year’s preparations, in the kind of training we have done. A long-term planning is required to be ready for the Dakar. I think I am best prepared for this one.”

The Bengaluru-born said deciphering the roadbook while charting the race route will be most important aspects as racers are barred from peeking into the routes ahead of the race.

“We need to visualise and expect the route from the roadbook, going by instincts and experience,” he added.

Hero unveiled its RR 450 rally bike at the event. The team impressed on their debut last year, being the only manufacturer team whose riders completed their races, finishing 12th.

They then won their maiden Baja India title in 2017 at Jaisalmer and enjoyed a podium finish at the Desert Storm.

Team manager Wolfgang Fischer said their target is to finish among the top 10 teams at Dakar, hoping an “upgraded” bike will help them achieve their goal. It was tested at the OiLibya Rally in Morocco earlier in the year.

“It is easy to handle with the weight properly distributed throughout. It is a huge improvement on the bikes we had last year,” Santosh said.