Runversation: Marathons, great way to be out with nature

The Marathon is an opportunity because the outcome is uncertain... because it is up to you, and only you, to make it happen. 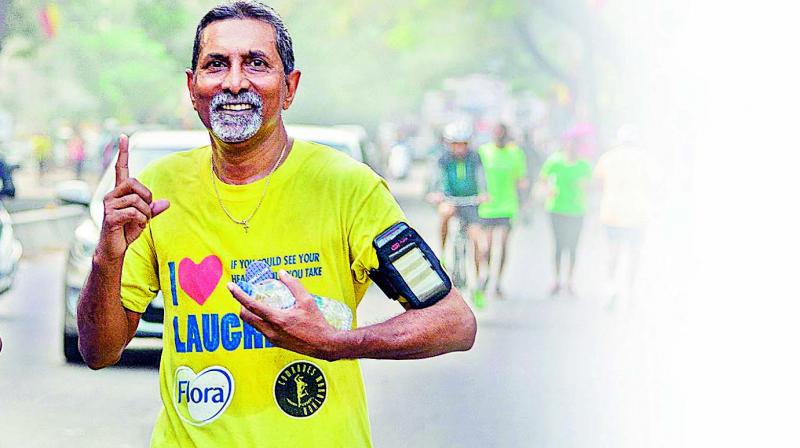 Samuel Reddy is a long-distance runner and a full-time ordained pastor. A 12 times Comrades runner, he’s a well-known name in the Bangalore running community.

Samuel Reddy is a long-distance runner and a full-time ordained pastor. A 12 times Comrades runner, he’s a well-known name in the Bangalore running community

Jim Fixx was author of the 1977 best-selling book The Complete Book of Running. He popularised the sport of running and demonstrated the health benefits of regular jogging. In his books and talk shows he extolled the benefits of physical exercise and how it considerably increased the average life expectancy. In his book he narrates the story a woman who described her husband by saying, “Ted used to be a Methodist, but now he’s a runner.”

To some running is a form of release and to others it’s a way of staying fit, and for a growing minion, running is religion. Some weekend warriors bemoan the fact that running hurts, legs burn, myriad of body parts ache, brows sweat and on long runs the minutes pass by like hours and the miles like molasses, many other athletes really enjoy the pentative part of running.

Sometime in the late ’70s, with his ears close to the radio, Samuel Reddy was the listening to the live proceedings of the largest and toughest ultra marathon — Comrades Marathon. It kindled the runner in him and he had this desire to run it one day, which he accomplished in 1980. Since then he has logged several marathons under his belt and ran the Comrades a dozen times. When he’s not running, Samuel Reddy, rather Pastor Samuel Reddy, the long-distance veteran preaches in a church. On his love with running he says, “Stories of tenacity have made an impression on me. In essence we are all running a spiritual marathon! “When I run, I run with myself, my thoughts and with my prayer and it’s something very peaceful and it soothes the mind and the soul. It’s a great way to be out with nature, we know God is part of nature for sure,” he explains.

Marathons are not about running, they are about salvation. We spend so much of our lives doubting ourselves, thinking that we’re not good enough, not strong enough, not made of the right stuff. The Marathon is an opportunity for redemption. Opportunity, because the outcome is uncertain. Opportunity, because it is up to you, and only you, to make it happen. There is no luck involved in finishing the Marathon, the ingredients required to tackle this formidable challenge are straightforward: commitment, sacrifice, grit, and raw determination. Plain and simple, just as anything else in life.

Pastor Samuel Reddy loves blending his life’s passions — long-distance running and religion. He adds saying, “Running to me is a monastery — a retreat, a place to commune with God and myself, a place for psychological and spiritual renewal. I sing while running and that makes runners curious and talk to me. It gives me an opportunity to make friends along the way. It might just be hearing someone, listening to someone, showing compassion and spreading the passion. We are creatures of passion and not of reason. If people were possessed by reason, running marathons would not work.”

Pastor Samuel Reddy draws inspiration from what Eric Liddell says in the 1981 film Chariots of Fire, “I believe God made me for a purpose and He also made me fast. When I run, I feel His pleasure.”