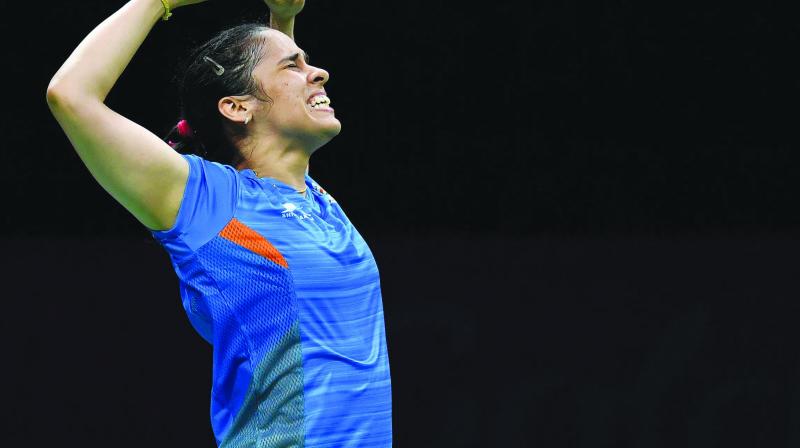 Saina Nehwal celebrates her 21-18, 23-21 win over P.V. Sindhu in their women’s single final at the Commonwealth Games in Gold Coast on Sunday. (Photo: AFP)

Gold Coast: Saina Nehwal’s aggression and intensity quite literally brought top seed P.V. Sindhu to her knees as she ensnared the women’s singles Commonwealth Games gold but K. Srikanth and the debutant men’s doubles pair of Satwik Rankireddy and Chirag Shetty settled for silver medals on the final day of the event here on Sunday.

In an exhilarating contest, Saina won 21-18, 23-21. The triumph marked a remarkable end to her CWG campaign this edition. She was the pillar of India’s gold-winning campaign in the team championship earlier, playing every one of the singles matches because of Sindhu’s ankle injury.

She had earlier claimed the 2010 Delhi Games gold.

However in men’s singles, world no. 1 Srikanth let slip a strong start to lose 19-21, 21-14, 21-14 to Malaysian icon Lee Chong Wei, who claimed the third individual gold of his career. He also has two mixed team gold medals to his name.

Also ending second were Satwik and Chirag, going down to Rio Olympics bronze medallist Marcus Ellis and Chris Langridge of England 21-13, 21-16 in a 39-minute contest.

Overall, India signed off with their best-ever haul — two gold, three silver and a bronze in the badminton competition.

The highlight of the day was the Saina-Sindhu clash, which lived up to the hype with the former world no. 1, especially, bringing her A game to the court. Sindhu found it tough to adjust to the delicate placement of strokes by Saina, who took the pace off the shuttle by attacking the net.

The strategy worked quite well for the London Olympics bronze medallist and she raced to a 9-4 lead. As the gap widened, Saina’s command on the baseline also improved. The contrasting styles of the two shuttlers made for an exhilarating contest.

A telling image of the opening game was when Sindhu was brought to her knees trying to return a smash that didn’t really have any power in it but was just placed perfectly on the left corner.