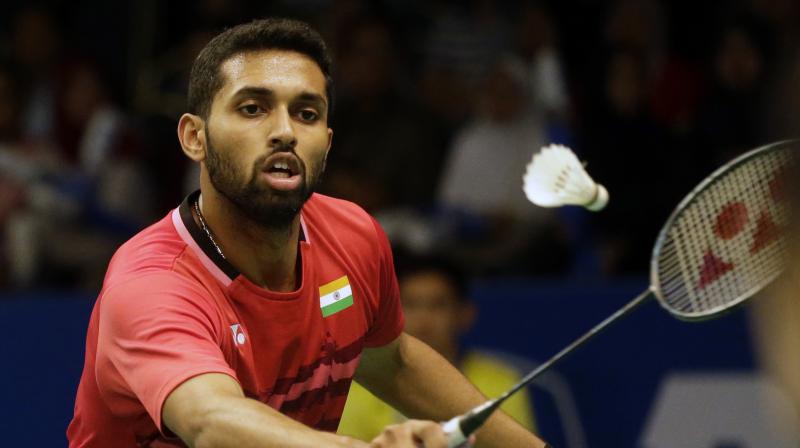 A day after he dispatched three-time Olympic silver medallist and World No. 1 Lee Chong Wei, Prannoy showed his mettle once again as he saw off eighth seed Chen Long 21-18 16-21 21-19 in an energy-sapping men's singles match that lasted an hour and 15 minutes.

World No. 25 Prannoy, who made his way through the qualifiers, had never defeated the Chinese in their earlier three meetings but it was a different day as the Indian showed great athleticism and better control in windy conditions to emerge victories and enter his maiden semi final of a super series event.

Compatriot Srikanth, who was playing on another court, also reached the last four round with a 21-15 21-14 win over Chinese Taipei's Tzu Wei Wang. Prannoy will take on the winner of the match between Japanese qualifier Kazumasa Sakai and England's Rajiv Ouseph, while Srikanth will face Korea second seed Son Wan Ho next.

Prannoy opened up an early lead at 8-5 before extending it to 11-7 with a jump smash to enter the break with a four- point advantage in the opening game. After the break, Prannoy's backhand went to net and he also hit long to concede points. A cross court smash took the Indian to 15-10, while a defence lapse from Chen Long gave Prannoy a 17-11 lead.

But the Chinese grabbed two more points with a net dribble and angled smash. Prannoy faltered with two backhand returns as Chen Long made it 15-18 in a flash. A smash and a magnificent rally won gave Prannoy five game points. Chen Long managed to save two points before Prannoy grabbed the opening game when the Chinese hit wide.

In the second game, Prannoy and Chen Long engaged in a fierce rally with the Indian depending on his smashes and the Chinese riding on his better net play. After 6-6, Chen Long grabbed four straight points to reach 10-6. Prannoy smashed one but he sent another cross court to the net as it was advantage Chen Long.

After the break, Prannoy narrowed the gap to 11-12 with Chen Long hitting wide. But the Chinese produced some stunning returns to once again distance himself. Prannoy levelled par at 16-16 with an accurate net return but Chen Long once again opened up a two point gap.

Another judgement error at the baseline took the Chinese to 19-16 and he grabbed the game when the Indian failed to lift a shuttle at the net. In the decider, Prannoy lagged 1-4 behind early on, owing to a series of miscued strokes at net.

The Indian narrowed it to 3-4 by trying to change the pace of the rallies. Prannoy managed to level the score at 7-7 when Chen Long faltered at the net. Chen Long, however, ensured he had the advantage when he entered the break with a slender 11-10 lead.

After the interval, Prannoy won a point after Chen Long's unsuccessful challenge. The Indian started controlling the rallies and moved to a 16-13 lead with an angled crosscourt shot.

A long rally ensued which Prannoy won after his rival faltered at net. However, Chen Long again draw parity at 17- 17, before Prannoy won an extraordinary rally to reach 19-17.

Chen Long pushed one back to the baseline to win the next point but a crosscourt smash at the Chinese's forehand gave Prannoy the match point and he grabbed it with both hands when his rival hit wide again.