Czech Kvitova gets the better of struggling US tennis star; Rogers downs Peter. 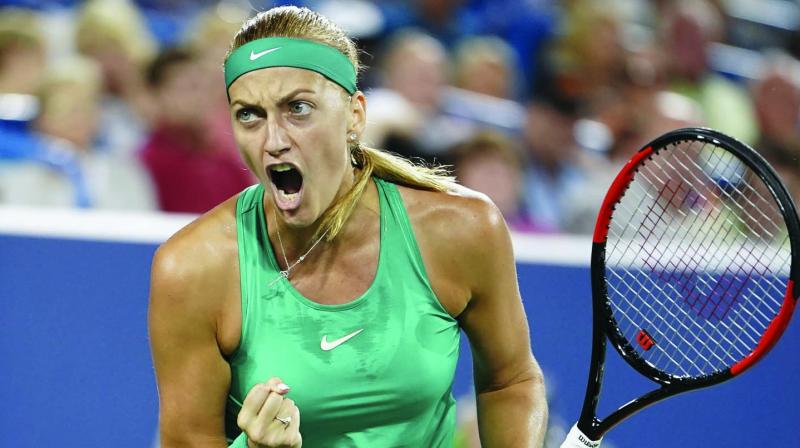 Cincinnati: Roger Federer began his US Open preparation with a quick 6-4, 6-4 defeat of Peter Gojowczyk in his first ATP Cincinnati Masters appearance since 2015.

The 20-time Grand Slam champion, who turned 37 last week, is pacing his tennis year, playing a limited schedule and skipping events when he feels the need to rest.

He has missed the last two editions of this tournament because of injury.

Eighth seeded Petra Kvitova used her precision serve to overpower Serena Williams 6-3, 2-6, 6-3 in their second round match on Tuesday night.

Federer’s defeat of the 47th-ranked German in 72 minutes marked his first step towards a possible eighth title at the tournament.

“I felt good in that first match, to be honest, walking out, hardly any nerves. I think I knew what I had to do,” Federer said.

“It’s fast-court tennis. I knew my opponent was going to go for it and take big cuts at the ball. So there is only so much you can really do.

“It’s nice to have played a match so that my last match was not the Anderson match... You’ve kind of turned the page. It’s a good thing.

“The goal is now to recover from this match, take the positives with me. Of course the big goal is the US Open.”

The contest was the first for the Swiss since losing to Kevin Anderson in five sets in the Wimbledon quarterfinals on July 11.

Eighth seed Dominic Thiem was forced to withdraw without hitting a ball. He was from a virus.

The Austrian played just one losing match last week in Toronto on the hardcourts since making a late switch from post-Wimbledon clay.

The Australian will next face Croatian Borna Coric, who beat Daniil Medvedev 6-2, 6-3.

Chung handed the slumping American an eighth straight defeat, with Sock’s last win coming in the opening round at Rome three months ago.

Unseeded Milos Raonic advanced past Serb Dusan Lajovic 6-3, 6-3 at the combined ATP and WTA event, the last major tune-up prior to the US Open on August 27.

In the women’s draw, the second set of the Kvitova-Serena contest was significant for the latter because it was her first set win this season against a top 10 opponent.

Out of gas
The 23-time Grand Slam champion won her first round match over Daria Gavrilova in straight sets 6-1, 6-2, on Monday but appeared to run out of gas in the third set against Kvitova. Serena lost 3-6, 6-2, 3-6.

Just two weeks ago, Serena suffered the worst defeat of her career in San Jose when she was crushed 6-1, 6-0 in 51 minutes by world No. 39 Johanna Konta.

Czech ninth seed Karolina Pliskova made a personal breakthrough as she beat Agnieszka Radwanska for the first time after seven previous straight-sets losses to the Pole, winning by a 6-3, 6-3 verdict.

“It was a tough round for me because I’ve never beaten her, never even taken a set,” said Pliskova. “I was so happy when I won the first set because I thought, ‘Finally, one set for me.’”