Sindhu has been the most consistent performer in the World Championships in the last few years with two silver and as many bronze medals. 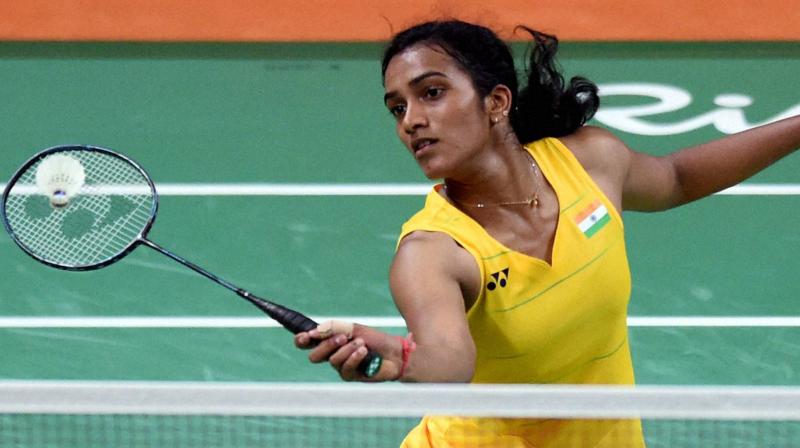 The 24-year-old Indian ace will once again be the biggest hope as she spearheads the country's challenge at the World Championship which begins in Basel, Switzerland on August 19. (Photo: PTI)

New Delhi: Olympic silver medallist P V Sindhu said on Friday that she has been working on improving her fitness and defence in search of an elusive gold in the showpiece World Championships next week.

Sindhu has been the most consistent performer in the World Championships in the last few years with two silver and as many bronze medals but a gold has still eluded her.

The 24-year-old Indian ace will once again be the biggest hope as she spearheads the country's challenge at the World Championship which begins in Basel, Switzerland on August 19.

She lost to Nozomi Okuhara of Japan and Carolina Marin of Spain respectively in the summit clash of the last two editions of the World Championships in 2017 and 2018.

Asked if she is hoping to make it third time lucky, Sindhu replied: "Well, I have trained hard and I hope I can do well. I have to perform well but there is no pressure."

"I been working on my defence, physical fitness and also on-court skills. We do have all kinds of strokes but to improve we have to keep training. So I have to do it all the time to make myself perfect," Sindhu told PTI in interview.

Japan's Akane Yamaguchi was the one player who stopped Sindhu twice with an aggressive game plan in the last two tournaments of the year in Indonesia and Japan.

Asked if the new World No. 1 Yamaguchi will be the biggest threat to her World Championships gold hope, Sindhu said: "I don't think so. I played well against her in Indonesia but she was good. She was attacking well and she is also a rally player.

"I was not surprised by her aggresion. I was ready but it happens, may be had I won the first game, things could have been different," Sindhu said.

Sindhu, who has been seeded fifth, received a bye in the first round and will open her campaign against either Chinese Taipei's Pai Yu Po or Bulgaria's Linda Zetchiri. If she wins, Sindhu is likely to meet Beiwen Zhang of USA in the third round while Chinese Taipei's Tai Tzu Ying is likely to wait for her at the quarterfinals.

"At World Championships, it will not be easy from the first round itself. If you see the draw, I am playing a Chinese Taipei player and then Beiwen Wang, she is not an easy players and if I can win, I will be against Tai Tzu Ying in quarters. I have to focus on each match, because you never know."

Since claiming the World Tour Finals in December last year, Sindhu has not been able to win another title this year. Two semifinals finishes at India Open and Singapore Open are all she had to show before she produced a superlative display to finish runners-up at Indonesia Open last month.

On her rigorous training under new South Korean coach Kim Ji-hyun, Sindhu said, "It has been good. I am happy with my performance. With Kim, I have a good communication and I hope to do well in World Championship.

"She pointed out a few mistakes that I was doing at the net, and overall, so I had to improve on that aspect. I got almost a month time before Indonesia, so had a good training and it showed at Indonesia.

"Her mindset and thinking is different and she motivates me a lot. Every coach has a different approach and I got used to her quickly. She joined after All England, so it took some time to get used to her way. Now we understand each other well."

Asked about her plans for the Tokyo Olympics, she said, "There is still time. It is important to play all the tournaments because the qualification is important. So till April next year, I plan to play and then we will take a call depending on how my game is, my fitness levels and how training goes."