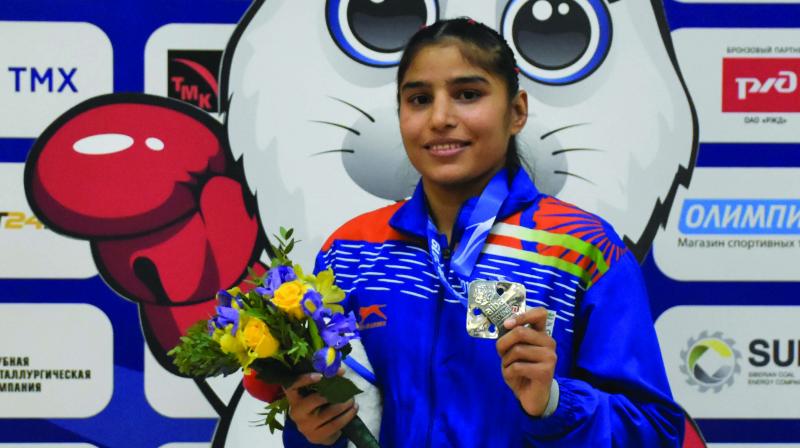 Manju Rani poses with her silver medal at the Women’s Boxing World Championship in Ulan-Ude, Russia.

Hyderabad: Heartbroken and shattered, all of 12, Manju Rani had lost her father, Bhimsen Singh, to stomach cancer. Nowhere to go and none to take out frustration on, Rani found solace in boxing. She preferred punching the bag, hard, and letting go off the anger to sitting at home and mourning the loss of her father, who was a Havaldar with the Border Security Force. After winning a silver medal at the recently concluded Women’s Boxing World Championship in Ulan-Ude, Russia, did Manju think about the very reason for which she donned the boxing gloves? “When I won the medal all I could think of was my mother and all the sacrifices she has done for me. Yes. The reason to pick up a boxing glove could very well have been my father's death but the reason I continued to box was cause I fell in love with the sport,”  Manju told this newspaper.

“Now, all I want to do is keep winning medals for my country and never look back. My journey to the Indian team has not been easy. It has been filled with obstacles, one after the other. I come from a very humble background and I did not even have a Sports Authority of India (SAI) qualified coach to train me. No fancy ring, no modern equipment, no mat, no air conditioned halls or dieticians or physiotherapists who could have prepared us for the bigger things in life. All we had was a punching bag hanging from a tree in the middle of a farm and will to win medals for India,” the World Championship silver medallist recollected.

“My coach, Saheb Singh Narwal, has guided me along the way and refused to give up on me even when I wanted to leave boxing in 2017,” the 20-year-old said. Manju had lost the State championships in 2016 and was defeated the following year at the district level. However, it was at Saheb Singh’s insistence that Manju did not give up on boxing.

“I competed at various district meets since 2013. But the breakthrough was just not coming through. If I progressed from the district meets, they would not let me win at the state events. It went on for about five to six years on a loop. Until, I had enough and finally decided to move out of Haryana and compete from Punjab. In order to play from Punjab, I had to take an admission in a college in Chandigarh. I competed from Punjab in 2019 and won the state championship in the first attempt. In 2019, I beat a girl from Haryana in the women’s final at the National Championship to win my first national title. And from there my career was on a fast track,” Manju recollected.

And she has not looked back. Ever since earning her strides in 2019 — in the national team — Manju has won silver at the  Boxing Tournament in Sofia, Bulgaria; a bronze at the India Open in May; another bronze at the Thailand Open in July and now, silver at her maiden World Championship.