Holm, Correia steam it up

Holm, the 35-year-old American, knows that the victory here could give her career a second wind. 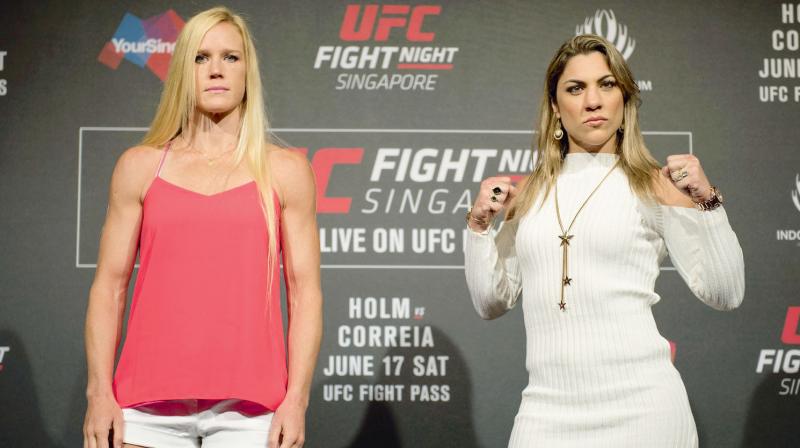 Singapore: They may be sworn rivals inside the octagon-shaped cage, expected to go for each other’s throat at the slightest opening as soon as the bell rings. But hours before their big ticket fight, the main event of Saturday’s UFC Fight Night 111 here, Holly Holm and Bethe Correia surprised everyone with their newfound bonhomie. The two women spent time together at the sprawling Marina Bay Sands, relaxing in the steamy comfort of the hotel’s sauna and even posting pictures on social media. Just a day ago, Correia had called her opponent an “overrated” fighter and expressed her desire to win the contest with a knockout.

The five-round bantamweight bout featuring contrasting personalities is the main attraction on UFC’s comeback event here on Sunday. Correia, nicknamed “The Pitbull”, is bold and abrasive. Holm, on the other hand, is nonchalant and lives up to her sobriquet “Preacher’s daughter.”

Holm, who comes from a boxing background, made a sensational entry into UFC with a second-round knockout to upset Ronda Rousey and become the second ever women’s bantamweight champion. However, since kicking Rousey to unconsciousness in the famous 2015 fight Holm has been on a three-match losing skid.

Correia said she would pile on the misery of Holm. “I don’t know if she loses again after this fight, whether she will retire or keep fighting. But if I win, I deserve a title shot,” added Correia.

Holm, the 35-year-old American, knows that the victory here could give her career a second wind. “Bethe has no idea what’s going on in my brain, so I hope she thinks she knows what’s going on in my head. For me, the only cure for my losses is a victory. So I’m going to keep plugging in, keep fighting,” said Holm.

The Fight Night here will feature 12 bouts – four on the main card and eight on the preliminary — with an array of Asian fighters looking to make a mark in UFC.