Sania Mirza calls Yuvraj Singh ‘Motu’, thanks him for his birthday wish

The duo has been involved in several comical tweets in the past too. 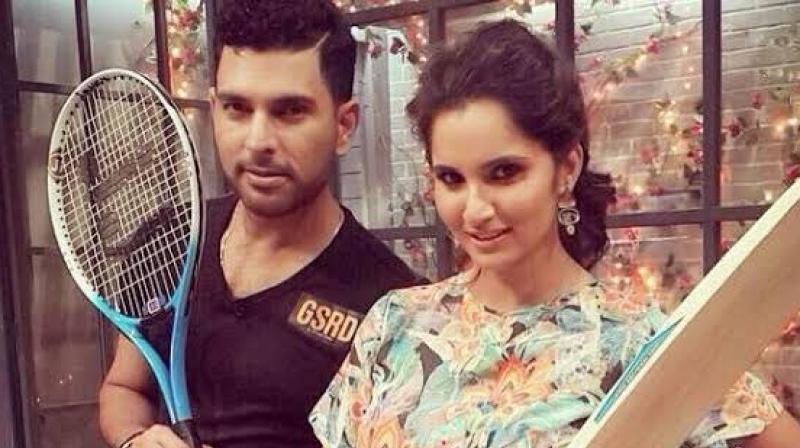 Yuvraj Singh and Sania Mirza, who are known for their quirky statements and responses, have recently exchanged friendly yet jocular banters between each other. (Photo:Twitter)

Mumbai: When India’s two famous sports personalities exchange witty banters, one thing is for sure, they grab the attention of the fans. And, in this case, the two sports persons are none other than Yuvraj Singh and Sania Mirza. Both of them have achieved great heights in their respective sports field.

Yuvraj and Sania, who are known for their quirky statements and responses, have recently exchanged friendly yet jocular banters between each other. Just a few days back, the former Indian cricketer had wished India’s famous tennis sensation Sania Mirza, stating “Hai hai mirchi ! Janam din mubarak my dear friend lots of love and best wishes always! @MirzaSania.”

The 37-year-old former player also shared a photo after Mirza turned 33 on her birthday.

Nevertheless, after Yuvraj’s tweet, Sania also came up with a hilarious response as she thanked her “motu” and “dearest friend”.

If we check their twitter handle, we can see, the duo has been involved in several comical tweets in the past too. The pair is known for pulling their legs all the time.

Earlier, after India’s 2011 World Cup winning all-rounder posted a clean shaved photo of himself on the social media, the photo has a caption stating, “New look chikna chamela !! or should I bring back the beard?.

New look 👀 chikna chamela !!😄🤪or should I bring back the beard 🧔?

Meanwhile, the mother of two gave a funny reply stating, "Are you pouting to hide the chin under the chin we spoke bout ???? Bring the beard back.”