Fears for Tour de France as cycling events are postponed 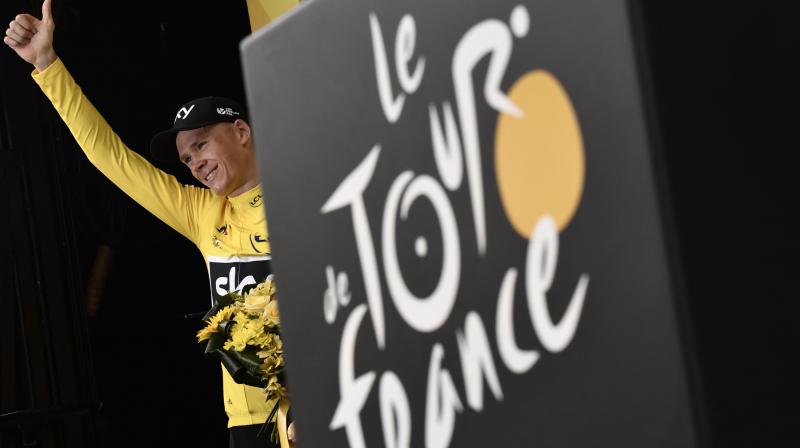 Great Britain's Christopher Froome thumbs up as he celebrates his overall leader yellow jersey on the podium at the end of the 181,5 km ninth stage of the 104th edition of the Tour de France cycling race between Nantua and Chambery in 2017. AFP file photo

Paris: The Paris-Roubaix cycling race, a major event on the French sports calendar, was postponed due to the coronavirus pandemic as organisers held back on changing dates for the Tour de France.

The one-day Paris-Roubaix race, contested in mud or dust over old cobbled mining roads in mid-April, is known as 'the Hell of the North' and is watched as avidly by the French public as the Tour.

The epic Liege-Bastogne-Liege on April 26 which is run through narrow winding Ardennes forest lanes, and the equally popular Fleche Wallonne on April 22, both fell victim to the virus outbreak.

There was further bad news for Belgian cycling fans when the April 5 Tour of Flanders, only previously cancelled during World War I, was also postponed on Tuesday.

Another ASO race in Britain's Tour de Yorkshire scheduled for April 30 to May 3, with male and female versions, has been called off too.

Paris-Roubaix has been raced since 1896 and has only been previously cancelled during wartime.

In a flurry of virus-hit cycling races, ASO stubbornly staged the Paris-Nice one-week tour that ended a day earlier than scheduled last Saturday.

ASO chief Christian Prudhomme suggested earlier this week he hoped the Tour could go ahead as scheduled for June 27 to July 19.

"We hope that this situation, for the good of the country above all, will be resolved before then," Prudhomme told AFP.