Kentucky Derby postponed from May 2 to September 5 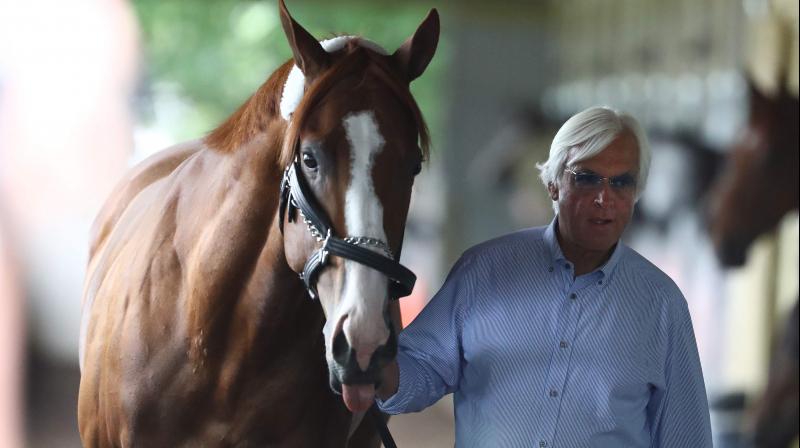 Triple Crown and Belmont Stakes contender Justify is walked in his barn by trainer Bob Baffert in 2018 at Elmont, New York. AFP Photo

Louisville: The Great Depression and World War I and World War II didn't stop the Kentucky Derby, a race that has been run without interruption since it began in 1875.

But for the first time in 75 years, it will miss the month of May.

Churchill Downs postponed the opening leg of the Triple Crown from May 2 to Sept. 5, due to concern over the coronavirus pandemic that has wreaked havoc with the world's sports calendar.

"At no point did we ever consider canceling the Kentucky Derby," said Bill Carstanjen, CEO of Churchill Downs Inc. In 1945, the track in Louisville, Kentucky, almost didn't have a choice. That year the race for 3-year-old colts was staged over a month past its traditional date on the spring calendar.

That January, horse racing was banned nationwide. Jimmy Byrnes, director of the Office of War Mobilization in Washington, viewed it as a waste of valuable resources.

Men that could be serving in the war instead were working in track operations, gambling on racing was hugely popular, and gas and tire rubber was being consumed heavily in transporting horses to tracks.

The Derby was in peril another time, too. Byrnes had come close to banning the sport in 1943, however, racing powers prevailed in keeping it going.

That year, there were travel restrictions imposed by World War II and no out-of-town tickets were sold. Still, the Derby endured, with Count Fleet winning in front of 65,000. He went on to win the Triple Crown that year, sweeping the Derby, Preakness and Belmont stakes.

The only other Derby not run in May came in 1901, when it occurred on April 29. His Eminence led all the way in defeating four rivals.

This year's postponement will require changes to the points system used to decide the 20-horse field for the Derby. More qualifying races at tracks around the country will be added this summer. Trainers will need to adjust training and racing schedules for their hopefuls.

"I'm going to have to back off some of them that are ready to go right now," said four-time Derby-winning trainer Bob Baffert, who has a handful of top prospects.

"The thing is to keep them healthy.''

While the coronavirus brings daily upheaval, the Derby and its traditions of sipping mint juleps, wearing fancy hats and singing "My Old Kentucky Home" will go on, albeit on Labor Day weekend.