US PGA Championship called off amid coronavirus pandemic 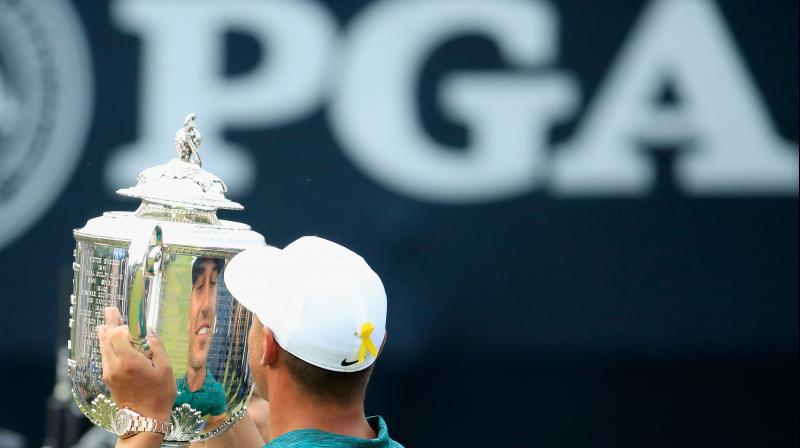 File photo of Brooks Koepka of the United States celebrating with the Wanamaker Trophy after winning the 2018 PGA Championship in St Louis, Missouri, in 2018. AFP Photo

Los Angleles: The US PGA Championship, scheduled for May 14-17 at Harding Park in San Francisco, has been postponed, the second 2020 major golf championship to be derailed by the coronavirus pandemic.

The PGA of America said Tuesday they hoped to reschedule the event at Harding Park later in the year.

The news came after Augusta National Golf Club announced that the Masters would not be held April 9-12.

The decision by the PGA of America to postpone the PGA Championship comes as millions of San Francisco residents have been ordered to stay home in a bid to slow the spread of the deadly coronavirus.

Six counties in the San Francisco Bay Area and the city of Berkeley were part of a lockdown effort after data showed 258 confirmed cases of COVID-19 with four deaths as of Monday.

"Throughout our evaluation process, we have been committed to following the guidance of public health authorities and given the coronavirus shelter-in-place order in effect in San Francisco, postponement is the best decision for all involved," said PGA of America chief executive Seth Waugh.

"This is a reflection of a thoughtful process," Waugh added. "We are and have been working in concert with Commissioner Jay Monahan and our partners and friends at the PGA Tour to find an alternative date that works for all. We are all very hopeful for a great outcome.

"We are also in dialogue with Mayor (London) Breed and her team at the City of San Francisco and look forward to hopefully bringing the 2020 PGA Championship to TPC Harding Park at a date this summer when it is once again safe and responsible to do so."