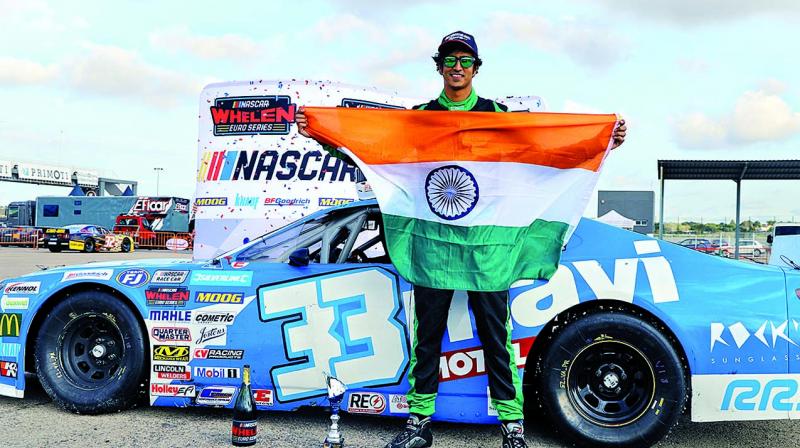 Mumbai car racer Advait Deodhar encountered a tough three years, without competing, due to a lack of funds. But he came back in style in the opening round of the 2018 NASCAR Whelen Euro Series at Circuit Ricardo Tormo, Valencia (Spain) this weekend.

The 28-year-old, racing in the Elite Club Division for Mishumotors in the No.33 Chevrolet Camaro, won the event that was run in a time trial format in his first race in Europe. He finished first in the opening session, and was second in the second session. This meant that he had won the event once the results were combined. Finishing second to Advait was Marcelo Silva, while Clemens Sparowitz took third place.

“I kept my motivation and worked very hard to be in optimum physical shape and be sharp on racing simulators. Winning on debut after a tough time was beyond my expectations,” he said from the UK where he works as a yacht broker, in order to fund his racing, as he moves up the ladder.

“This was quite different to what I have driven in my career so far, both in terms of the car and the championship. It was a great experience though, and to win it straight out of the box against some regulars on my debut in Europe was hugely pleasing,” he added.

Deodhar started racing in 2012 and started achieving good results by the start of 2014. He was in contention for the championship title in the FF1600 National Championship in 2014, but had to miss the final round after being diagnosed with dengue. He still managed to finish second overall, even after missing three races. In 2013-2014 alone, the talented driver racked up over 22 podiums in various categories of National level racing. He won on his debut in the Etios Cup, and secured several front row starts, as well as fastest laps in other series.

Deodhar has also competed in a few touring car races in India, which includes a race win in the Toyota Etios one-make series on debut, before eventually deciding to relocate to the UK to try and compete in the sportscar/touring car championships at the international level.

He was starting to make waves in India by the end of 2014, before his budget ran out. Now after making a remarkable comeback, he sees himself moving up into the next category in the Euro Nascar Championship and aims to be the first Indian to win a European Championship too.

“I am very glad with deciding to drive and I am looking forward to move into the ELITE 2 category from the next round, hopefully. I still need the budget and hope this wins helps me find it! The series is great and so is the car. More importantly, I'm glad to know that even after three years of not driving, I still got it!”

Deodhar lived in Colaba till the age of 16 before shifting to Bandra. He went to Campion School and later attended Jai Hind College. His passion for cars took Advait to Italy to study Automobile design between 2008-2012, where he had life changing experience of watching Monaco GP and started racing from thereon.

“Five days after I graduated in 2012, I was in a race car in Coimbatore. I let go of my car design life to chase the Motorsport dream. My family had no Motorsport background until recently. It was my passion from childhood. Things have changed in my household now, my brother now works for the Mahindra Formula E Racing team,” he said.