Fifa U-17 World Cup: Puyol blown away by passion for Barca

The veteran central defender was touched by some Barcelona fans who used Spanish chants to catch his attention. 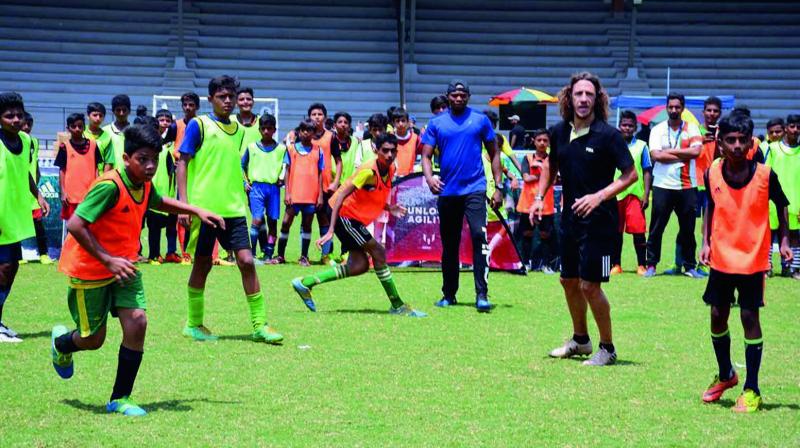 More than 500 children from various academies and schools were at the festival displaying their skills in front of the 2010 World Cup-winning Spaniard. The veteran central defender was touched by some Barcelona fans who used Spanish chants to catch his attention.

“I am happy and excited being here. I never expected so many passionate Barcelona fans here. I went on the pitch with kids and they are full of passion,” he said in Spanish, translated to English by Local Organising Committee Fifa U-17 World Cup tourament director Javier Ceppi.

“For India to become a footballing nation, kids need to start playing and parents, schools and other institutions have to promote the sport. Children have to practice, and they have to have fun while playing. Mission XI Million is doing exactly that and I think it is a great step to make football in the country more popular,” said Puyol who was never part of a junior World Cup team.

Minister of state for Youth Affairs and Sports, Vijay Goel, was also present on the occasion along with Bollywood actors Abhishek Bachchan and Dino Morea.

“70 such festivals are planned across the country this is just third,” said project director Joy Bhattacharya.

“By about 2am in the morning tickets sale had crossed 70,000. We faced site problems due to the amount of traffic. Fifa didn’t expect this response in a junior World Cup. Most of these are package deals. We expect a full house in all venues,” he added.

Bhattacharya also said Kochi’s concerns were being addressed. “We had far more serious concerns than a month and half ago, now we are quite confident of coming through.”

“India is a big country, Football has big potential considering its population. Every state has different quality, different genes in kids, football is developing in India.

“There is a need is to invest in grassroots and have patience. Results may take even 15-20 years to show,” felt Adidas technical director Afolabi who conducted a “Masterclass” to teach drills and skills to kids.

The 37-year-old retired defender won 20 caps for the Golden Eagles.

“In India talent is not enough, there is no platform, and infrastructure also is not there. Therefore, invest in coaching programmes at the grassroots level,” added Afolabi whose wife is from Kerala.