Holm planted her left shin squarely on Correia’s right jaw and followed it up with a powerful punch that gave the Brazilian no chance to recover. 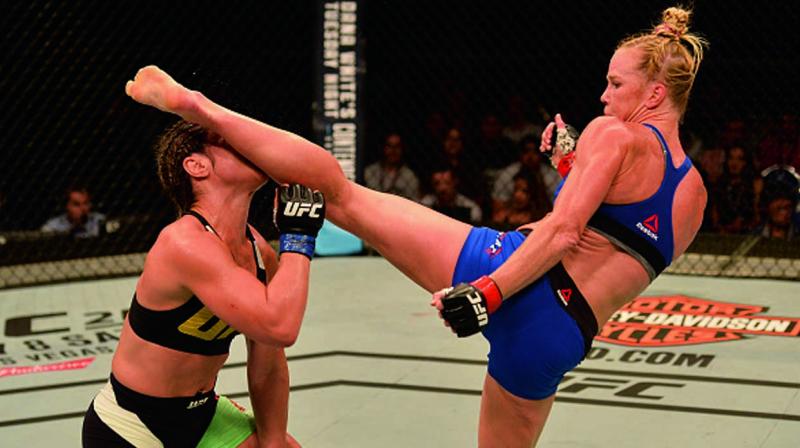 Making her comeback into the octagon after a gap of one-and-a-half years, Holm was desperate to arrest her three-match losing slide, but it took a while for the former champion to unleash the lethal kick that brought Correia down in the third round.

Both the fighters started off cautiously, dancing around the cage, as the restless audience — 8000-odd— started booing in the first round.

Not many would have expected the bout to end with two rounds to spare.

Holm planted her left shin squarely on Correia’s right jaw and followed it up with a powerful punch that gave the Brazilian no chance to recover.

“I agree the first two rounds were slow, but I wanted to pick my shots and not make it too messy out there.

“I picked the shot I wanted and got the finish. In my last two fights my opponents countered me, so I countered tonight. We figured she would get frustrated and that’s what opened up the opportunity for the head kick,” said Holm.

Holm dedicated the victory to her coaches and family. “I really wanted this for my coaches mostly. Just imagine how many hours they’ve put into me in this last year and a half. I’m going to enjoy this win tonight and then spend some time with my family,” she added.

The UFC organisers announced that the Fight Night fetched them (Singapore dollars) $1,160,793 in gate collection.

In the heavyweight category, Poland’s Marcin Tybura, featuring in just the fourth fight of his UFC career, pulled off surprise win over former champion Andrei Arlovski of Belarus. For Arlovski, who also acts in movies, it was his fifth straight defeat.

Tybura’s significant move came in the first round when he caught Arlovski off a low kick and tripped the action to the floor. Though Arlovski held tight underneath, Tybura managed to get to mount and landed a few lethal punches. Arlovski, who took a few shots turned to his knees in the final minute of the round much to the delight of the crowd.

Former UFC lightweight champion Rafael Dos Anjos of Brazil made a successful welterweight debut by getting the better of Belgian Tarec Saffiedine.