Are sports lovers in for some NBA action during shutdown? 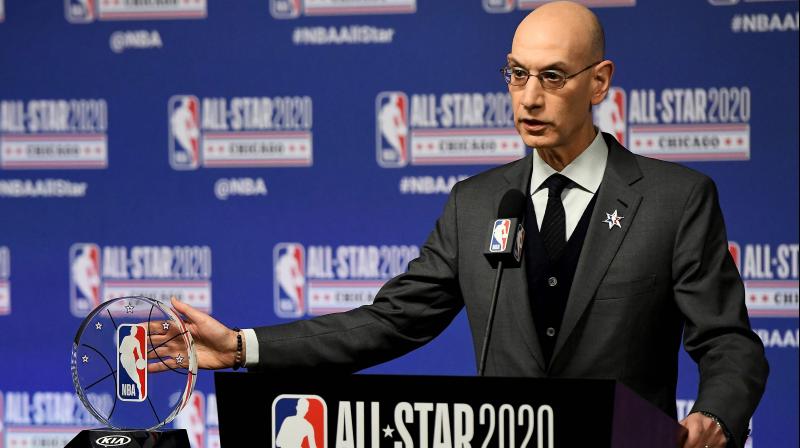 NBA Commissioner Adam Silver speaks to the media prior to the 2020 All Star weekend. AFP Photo

Los Angeles: The NBA is considering an idea where some players would be quarantined or isolated for purposes of being able to compete against one another and provide basketball fans with some sort of diversion from the coronavirus pandemic.

NBA Commissioner Adam Silver revealed that notion as one of several items under consideration by the league right now during the shutdown caused by the pandemic. Silver made the comments in a televised interview on ESPN.

"Maybe it's for a giant fundraiser or just for the collective good of the people,'' Silver said. "You take a subset of players and is there a protocol in which they can be tested and quarantined and isolated in some way. ... People are stuck at home. They need a diversion. They need to be entertained.''

No fans even after resumption

Silver offered no predictions on when NBA games would resume. He said the league may, when conditions allow, resume games but without fans -- a move the league was going to make last week before Utah's Rudy Gobert tested positive for COVID-19 and prompted the league to go on what it thought would be a hiatus, not a stoppage that is certain to reach multiple weeks and likely months.

Silver, as he often does, said he hopes the NBA can be a conduit to spark positive change in the country -- especially now when there will be a real need.

"One thing I'll say about the United States ... we're an incredible country and some of the greatest inventions, some of the best innovations, some of the best minds are in this country,'' Silver said. "And I'm sure as people are sitting home but still working they're thinking of these various things like how can we restart the economy and what role can the NBA play?''