Dutee, who won 2 silver medals at the 2018 Asian Games, became one of the few athletes in the world to openly admit same-sex relationship. 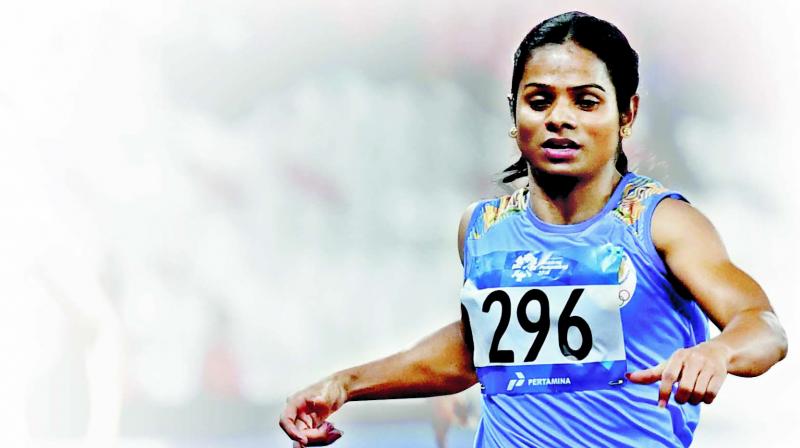 New Delhi: Unapologetic about her same-sex relationship with a younger relative, India's fastest woman Dutee Chand is facing a tough battle of acceptance in her family.

Dutee, who won two silver medals at the 2018 Asian Games, became one of the few athletes in the world to openly admit same-sex relationship. "I am having a relationship with a 19-year-old woman from my village for the past five years. She is studying B.A. 2nd year in a Bhubaneswar college. She is a relative of mine and whenever I come to home, I spend time with her. She is a kind of soul-mate for me and I want to settle down with her in future," Chand, 23, told PTI from Hyderabad where she is training.

A landmark judgement of the Supreme Court last year had made same sex relationship between consenting adults a non criminal act though marriage between such individuals is still not legal in India. Dutee, the 100m national record holder (11.24 seconds), says while her parents have not yet raised any objection to her relationship, her eldest sister has threatened to not only expel her from the family but also send her to jail. "My eldest sister kind of wields power and authority in my family. She has thrown out my elder brother from home because she does not like his wife.

She has threatened me that same will happen to me. But I am also an adult who has individual freedom. So, I decided to go ahead with this and make it public. "My eldest sister feels that my partner is interested in my property. She has told me that she will send me to jail for having this relationship," she said.

Dutee said her partner is free to marry whoever she wants to if she decides to do so in future. "I will continue my athletics career. I am going to take part in the World University Games next month and hope to qualify for the World Championships later this year. My aim to qualify for next year's Olympics, so I am training hard," she said.

While Dutee refused to name her partner, she said the Supreme Court judgement on the issue gave her the courage to go public. "My partner also agreed that we should make this public and face whatever repercussions it may bring to us. I believe in individual freedom and right to decide how and with whom I will live my life."

She said another reason for coming out in the open was that she did not want something which happened with sprinter Pinki Pramanik, who was accused of rape by her live-in partner. Pinki was a member of the 2006 Asian Games 4x400m relay gold winning team. "We did not want this kind of situation happening in future," Dutee said.

Dutee, who was banned for one year by the international athletics federation in 2014 for having higher testosterone (male sex hormone) level than permissible, hails from Chaka Gopalpur village at Jajpur district of Odisha and she was born to Chakradhar Chand and Akhuji Chand.

Dutee won a landmark 'gender' case against the IAAF in an appeal to the Court of Arbitration in 2015 and she was allowed to compete after being banned for one year. The CAS suspended the IAAF's policy on hyperandrogenism for two years.

Later the world body changed the policy, which applicable only on female athletes competing in the range of 400m to 1500m, leaving out Dutee, who competes in 100m and 200m, from its ambit.